From livestreaming to blockchain, more and more fruit growers in Vietnam are utilising technology to their advantage 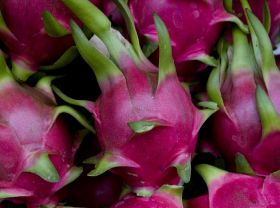 Vietnam’s horticulture industry is increasingly embracing the latest technology to improve production and connect with consumers.

According to a report from the Vietnam News Agency (VNA), a range of technologies are helping prompt the start of a digital transformation for the country’s fruit growers.

Le Van Chin, director of Que My Thanh Dragon Fruit Cooperative, said he turned to social media websites including Facebook and Zalo during the Covid-19 pandemic to sell directly to consumers using livestreaming.

“I livestream various stages such as farming, harvesting and packaging to create consumer confidence about my product,” Le said.

“Farmers are willing to embrace digital transformation and switch to natural farming as long as stable sales are ensured. I will continue to do livestreaming so that everyone can understand how dragon fruit is being grown without chemicals.”

“Despite their somewhat ugly appearance and shape, the fruit is popular with local consumers because of the quality. Also, the first batch of dragon fruit was exported to Dubai,” Chin said. “Consumers can scan the QR code on the product to know the exact origin.”

However, Nguyen said the integration of this technology was slow with many projects only in pilot or trial phases. Still, there were some early adopters already implementing traceability solutions such as Que My Thanh Dragon Fruit Cooperative.

Tu Minh Thien, rector at Van Hien University in Ho Chi Minh City, said the use of technology had contributed to nearly 35 per cent of the growth value of agriculture in Vietnam in the last five years.

Advances in irrigation such as drip, sprinkler and underground systems were making watering more accessible and efficient, providing growers with a significant boost.

Nguyen Quoc Toan, director of the Agro Processing and Market Development Authority, said that digital transformation would ensure transparency in the market.

Meanwhile, the addition of improved seeds and fertilisers and equipment had all combined to deliver lower production costs, less waste and water consumption and better quality fruits.

“Farmers must be the key players to ensure the success of digital transformation in agriculture,” said Nguyen Quoc Toan.