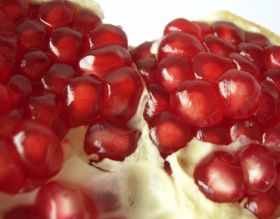 High-return pomegranates, along with the spice saffron, are touted as the replacement for the country’s poppies, reported Canada’s National Post.

“Pomegranates and saffron, these are the things that can compete with poppy in terms of value because they are very high-value crops,” said Mr Rahimi.

Exports of the Afghan pomegranate crop hit 50,000 tonnes last year, but there is room for improvement, according to Mr Rahimi.

“That is good but we can do better. We can produce much more pomegranate in Afghanistan. It can be sold as juice and in other ways that would make even more money.”

Mr Rahimi took the position of agriculture minister last year, and has since released a policy paper outlining a two-pronged plan to improve Afghanistan’s agriculture sector, by making credit available to farmers and finding ways to boost production.

While the Taliban has been out of power for seven years, Afghanistan’s agricultural industries are still in a poor state. Even so, they amount to 80 per cent of the national economy.

“I was shocked actually when I took over the portfolio. I felt like the Taliban left a week ago from Kabul even though they were out for seven years,” Mr Rahimi told the National Post.

In addition to pomegranates and saffron, there appear to be opportunities for sweet melons and raisins – Afghanistan produced 20 per cent of global raisin suppliers prior to the Soviet invasion in 1979.

Crops like the sweet melon need to be promoted further abroad, according to Mr Rahimi.

“We have to introduce it beyond the subcontinent, beyond India and Pakistan, to the Middle East especially because people have the money. They want to spend, they want to eat, but they don’t have the agricultural land to grow these things, while Afghanistan does.”

Opportunities for Afghan agriculture should be improved in the coming years with a Canadian-backed development project on the Dalha Dam in Kandahar Province.

In the meantime, Mr Rahimi said more effort is needed to encourage agriculture.

“While we work on the dam, we have to focus on farmers: to provide them with credit, provide them with some research, plant protection, organising them in farmer’s groups and producer groups, invest in some value added facilities, like packing, processing – fruit juice `and` that kind of stuff – so that Kandahari farmers can make more money,” he said.