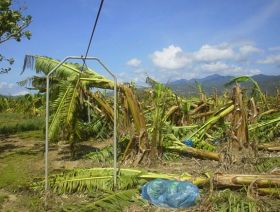 Jamaica Producers Group (JP) is reportedly considering expanding its production base to Central America in an effort to satisfy demand for bananas on the UK market.

The news follows last week’s announcement that JP would cease its production of bananas in Jamaica for export to the UK market after consecutive hits by hurricanes during the last few years.

JP chairman Charles Johnston told local newspaper Wednesday Business the company is looking at re-developing plantations in Costa Rica, where it operated land and contracted workers up until two years ago.

Mr Johnston also suggested Honduras could present another option for expansion since JP already operates a 202ha farm in the Central American country, which it uses to supply the US market.

“We are looking to move forward and Costa Rica is an option,” Mr Johnston explained to the Jamaican press.

JP controls an estimated one-third of the UK banana market and had just resumed exports to the country last month (following the damage caused by Hurricane Dean last year) when Gustav ripped through the Caribbean, destroying the company’s Jamaica plantations.

In the meantime, JP intends to maintain some of its Jamaica-based banana farms to grow the fruit for chips and other snacks, as well as the production of root crops for its agricultural processing business.