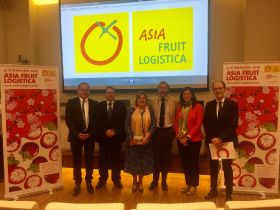 More than 40 Murcian fruit and vegetable producers took part in an event organised by Asia Fruit Logistica and Cajamar this week to raise awareness of new business opportunities in the region.

The trade fair, which is held in Hong Kong on 4-6 September, is described by its organisers as “the ideal tool for Murcian companies looking to start their journey in Asian markets”.

After an opening address by Joaquín Gómez Gómez, director of the Institute of Development of the Region of Murcia, Rafael Ortega of trade promotion agency ICEX highlighted the growing interest in Asian markets among Murcia’s fruit and vegetable exporters, and the importance of being part of Asia’s important trade fair for the fresh produce industry.

“Every year more Spanish companies take part in the stand that we coordinate at Asia Fruit Logistica, and among them, Murcia stands out for its presence,” Ortega said.

Analysing the differences between Asian countries, international consultant Oliver Huesmann, who has more than 20 years of experience in the fruit sector, told the assembled companies that now was the time to start exporting to Asia.

“The growing population in the region means that its production is not enough to supply domestic consumption in some countries, such as China and India, which import 60 per cent of their food,” Huesmann said.

Jesús López of Cajamar then took to the floor to outline the support that the rural savings bank could provide to growers wishing to target distant markets.

The bank’s International Platform of integral support services is a support tool designed to advise and help to different types of customers, allowing companies to access information on the different types of aid package available.

The event also heard from Alejandro Di Bisceglie, maritime and air director at Grupo Caliche, who urged companies to pay attention to the phytosanitary requirements that their product must meet to access Asian markets, as well as treatments during transportation to ensure that cargos arrive in good condition.

Delegates also heard from Josefina Mena, commercial director of leading Murcian table grape grower-exporter Moyca, which has been exporting to Asia since 2014 and supplies more than 20 countries in the region.

Mena reiterated that the key to success was focusing on providing high quality, a good service, and above all a rapid response to market demands.

With China and Vietnam having recently granted access to Spanish table grapes, Mena said Asia Fruit Logistica has been instrumental in the growth in the company’s exports to Asia.