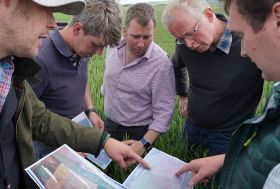 The Soil Regenerative Group – a Farming for a Better Climate (FFBC) project facilitated by SAC Consulting, part of Scotland’s Rural College (SRUC) – has been created to explore the best management techniques, treatments, crops and rotations to establish resilient farm soils and the best way to integrate these into a profitable business.

The group consists of five farmers in the east of Scotland who are experimenting in different ways to revitalise soil health and are at varied stages of adopting “regenerative”, or conservation, farming.

According to the group, ideas are explored via regular discussions and contact on WhatsApp, which allows for frequent visual and video updates, and lessons are shared both in the group and the wider farming community about what has and hasn’t worked.

Facilitator Zach Reilly, of SAC Consulting, called it "a great example of peer-to-peer learning". The three-year initiative is currently at the end of its first year.

“The open conversations and diverse activity and experiences of these five farmers is the heart of its success," said Reilly. "They are all trying very different and interesting methods and, although across a mix of farming enterprises, there is overlap and the real value is that they are all learning from each other. They all have a shared ambition to rebuild soil organic matter and restore degraded biodiversity and to make it financially feasible. It’s a brilliant process to watch develop and to see how much working together can move farming businesses forward.”

Ross Mitchell of Castleton Farm specialises in strawberries, raspberries, cherries and blueberries produced under polytunnels. He is reportedly experimenting with reducing soil compaction through minimum tillage and has been attempting various methods of establishing green cover crops.

Douglas Ruxton, an arable farmer, has focused on regenerative farming since 2012. “Many of the processes we are looking at were the norm in the past but in an industrial era we have become reliant on heavy machinery and chemical inputs," he said. "It’s becoming clear that these have their downfalls and if the next generation is going to profit from the soil as well, we need to rebuild it. Soil is our greatest asset and we need to get the basics right before we go high tech.”

"Cover crops, for example, have an establishment and seed cost," he said. "However, if the soil structure improves and we see better drainage in a wet year or it holds the moisture in a dry one, then it is worth it. Equally if we can decrease our inputs, we save costs."