Value of country's fresh fruit and vegetable shipments to markets such as Brazil, Canada and China dropped in 2020 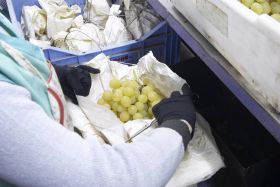 The value of Spain's fresh produce exports to markets outside of Europe fell 13.5 per cent last year, according to data from the country's Department of Customs and Special Taxes.

The figures, processed by Fepex, showed that the value of exports outside of Europe came in at €519m.

Sales to the EU and non-EU European countries increased by 8 per cent and 22 per cent respectively, to €13.5bn and 1.09bn.

Shipments of fruit and vegetables outside Europe represented 4 per cent of Spain's total export value in 2020, which stood at €14.59bn.

In the EU, the export value of Spain's fresh fruit and vegetables stood at €14.5bn, 8 per cent more than in 2019 and representing 92.5 per cent of the yearly total.

"For Fepex, the reduced volume and value of Spanish fruit and vegetable exports outside the EU and European markets, has been exacerbated in 2020 by Covid-19, since transport to distant countries has been greatly complicated by restrictions and by the decrease in the number of trips, both by ship and by plane, which has made the days of the merchandise journey increase and exportation is not feasible," the organisation noted.