Despite following a year of record-breaking sales, the branded brassica has reported a 20 per cent uplift so far this year 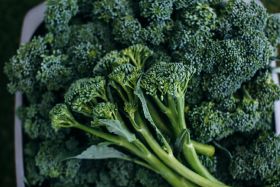 Sales of Tenderstem have seen double-digit growth in the first two months of 2019 as the brand got off to a strong start to the year.

Tenderstem reported that after a record-breaking year in 2018, in which over 12.5 million kg were sold, sales were already 20 per cent up in January and February this year, compared to the same period 12 months ago.

“These results continue to prove growing awareness of Tenderstem within the vegetable category,” said marketing manager Theresa Richards. “Consumer trends focusing on health and lifestyle choices, such as veganism and flexitarianism, are leading consumers to be more adventurous with their eating habits and means they are willing to pay more for premium vegetables like Tenderstem.”

Cropping from early June to November, Tenderstem has a long growing season, and grower Danny Grover from Barfoots Farms reported that planting for the 2019 season started in late March with a favourable spring, which allowed the firm to get tractors onto the farm early.

“Pest pressure is fairly minimal, with favourable weather conditions on the south coast and onshore sea breezes keeping this at a minimum,” he explained. “The biggest seasonal challenge are the warm, long days, peaking at the end of June around mid-summer solstice.”

Tenderstem intends to capitalise on its strong start by expanding its ‘Make Every Dish A Little Adventure’ campaign, which aims to inspire and educate consumers through chef collaborations, recipe development and influencer engagement, according to Richards. The campaign is partnering with chefs Yasmin Khan, Zoe Adjonyoh and Meera Sodha, who have created recipes inspired by foodie capitals around the world, from Durban and Istanbul to Rajasthan and Seoul. It particularly hopes to inspire consumers to be adventurous with their mid-week meals.

“As a brand, we invest heavily in wide-spanning marketing campaigns across print and digital advertising, including social media advertising, PR and diverse marketing initiatives, to help increase brand awareness and encourage consumers to try something new in the kitchen with Tenderstem,” she said. “We have just relaunched our website, hosting new features in a more accessible format for Tenderstem fans.