Mixed weather couldn't stop good yield and quality for the Kent-based co-operative, with a little help from Wimbledon 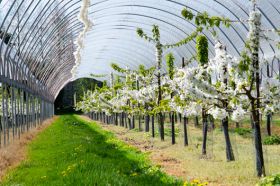 Berry Gardens had its best ever week of sales despite topsy-turvy weather hitting the UK berry season after a “great start”.

The Kent-based co-operative said early glasshouse and heated production flew off the farm before of a sudden dip in spring temperatures impacted availability.

Nevertheless, Berry Gardens reported their biggest week of sales, shifting 2,330 tonnes of berries and cherries in the third week of June, thanks in part to the Wimbledon effect, with sales up 10 per cent during the tournament.

“However in May the temperature dropped resulting in plants slowing down, working with our partner Driscoll’s we were able to maintain availability of berries.”

Blackberries were once again the biggest riser in volumes, up 21 per cent, with Berry Gardens Market share this year at 61 per cent compared to 50 per cent in 2018.

The co-operative reported that strawberry sales remained static year on year, predominantly down to the cold snap in May and phasing of crops.

Raspberry production grew by just over eight per cent year on year with Berry Gardens’ market share up to 40.2 per cent, an increase on 35.5 per cent in 2018.

Brooks revealed ambitious plans for the group to expand its blueberry production from 209 hectares to 300 hecatres (+16.7 per cent) by 2022.

“Berry Gardens Growers' continued investment in blueberry plantings is reflected in our increased market share up from 5.7 per cent in 2018 to 8.7 per cent in 2019. As a co-operatie we have increased our planting of blueberries from 179 hectares last year to 209 this year," Brooks said.

“The increased growth is supported by our members, who were the early pioneers of British blueberries, and also new members of the co-operative including Mee Farmers based in Peterbrough, and Bradley Farm in Shropshire, a new member this year.”

Managing director Jacqui Green said the start of the cherry season was also showing a high quality crop. “The fruit size is remarkable. It’s been a slow build to the season, and the flavour is exceptional. It was a good period of pollination, a perfect climate conditions. The sugars are great.”

Green said one of the most exciting new aspects for the company this year was choosing the first trainees under its new "Pick Me" management scheme, to start this September.

"At Berry Gardens we are passionate about growing and nurturing talent. Over the last year, our HR department have been busy engaging with schools, colleges and universities to raise awareness of the industry and promote Pick Me, our two year management development programme, which will commence this September.”

While not designed exclusively as a graduate programme, the four new recruits will come straight from university and will begin their journey in secondments, placed in production, QA and procurement.