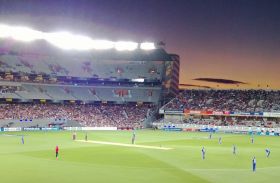 New Zealand’s Ministry for Primary Industries (MPI) has confirmed fruit fly larvae was found inside windfall fruit collected from two properties in Auckland over the weekend.

The two properties are among four Auckland residential addresses that are now receiving ground treatment for fruit fly, which includes targeted foliage spraying and the use of insecticide granule. All four properties are located within an exclusion zone set up around the suburb of Grey Lynn following the discovery of a singular male Queensland Fruit Fly (Q-Fly) last month. A total of 14 flies have now been found within the exclusion zone.

MPI moved to prevent the spread of the incursion over the weekend, hiring an additional 60 staff to remind patrons at Saturday’s Cricket World Cup match between South Africa and Pakistan about the outbreak. The game was played at Eden Park, which is located within the exclusion zone. Fans were not permitted to take any fruit or vegetable material out of the ground, with authorities destroying over 10 tonnes of caterers' waste following the game.

MPI has refused to put an end date on its response operation, other than saying its expected to take several months to complete.