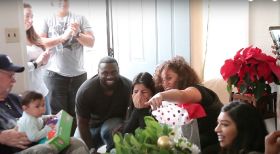 Los Angeles-based non-profit A Sense of Home (Asoh) has been given a boost this festive season, with fresh produce customs brokerage company J&K Fresh acquiring a warehouse for Asoh’s office space.

J&K Fresh has sponsored Asoh since the after-foster care organisation was first established three years ago, this year expanding on its donations with the acquisition of a 10,000ft2 warehouse for Asoh’s offices and storage space.

J&K Fresh vice president Raymond Keffer worked alongside the Cal Cartage Companies to secure the space, which the company says will allow Asoh to close down its storage units and provide jobs to young men and women.

“We at J&K Fresh are excited to continue partnering with Asoh to ensure our next generation has access to the resources they need to achieve the success they deserve,” the company said in a statement released 16 December.

The warehouse space adds to years’ of donations and gifts given by J&K Fresh, which has also assisted in home makeovers for youth transitioning out of foster care.

Asoh has aided almost 150 young people in Los Angeles, furnishing homes and creating a sense of community, with co-founder Georgie Smith making the top ten finalists for ‘CNN’s Heroes’ in 2016.