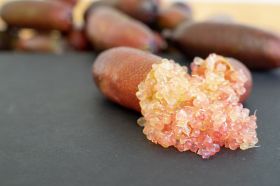 Production and marketing of Australian-grown Finger Limes is steadily increasing as the sector looks to meet the growing demand for this unique citrus crop.

Finger Limes, which boast high Vitamin C, folate, potassium and Vitamin E content, are native to the rainforests of the border ranges of northern New South Wales and South East Queensland, with the majority of commercial Australian production concentrated in the region.

The fruit, which is used as a garnish in foodservice and is often referred to as citrus or lime caviar, has a new production site established at Boorhaman in Victoria by OZ Finger Limes.

The plantation was established in 2014 and now has over 4,000 trees planted across 15 varieties, with a harvest period of mid-January to late May. Oz Finger Limes in planning to expand this to over 15,000 trees in the coming years.

The group has engaged Adrian Parsons of 160 Acres Group to market the Finger Lime crop across local, export, fresh and processed food channels.

"There were many sceptics who said Finger Limes couldn't be grown in southern Australia due to the colder temperatures," said Parsons. "However, we have dispelled this myth with specialised planting and fertiliser methods and we now expect our first commercial harvest in January 2019. Once the frosts commence in late autumn and early winter, our Finger Lime fruit drops which can shorten our season by 4-6 weeks compared to production sites in northern New South Wales and South East Queensland.

"I am very excited to assist Oz Finger Limes to carve out a niche for this fantastic native citrus crop where a strong demand exists across both high-end restaurants and retail outlets," he added. "I am keen to make contact with interested distributors in both Australia and overseas as we launch our first commercial crop in early 2019."

To encapsulate the flavour profile of Finger Limes, 160 Acres Group has developed the Zings Finger Lime brand for retail distribution, designed to lift consumer awareness where the fruit currently has a relatively low profile.