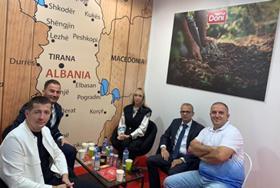 Albania is looking to double its exports of fresh fruit and vegetables to countries in Western Europe according to Agriculture Minister Frida Krifca.

She said the government is working on a number of policies to support the fruit and vegetable sector, which accounts for 20 per cent of Albania’s GDP and 40 per cent of employment. These include providing direct aid to farmers and processors to galvanise the creation of the value chain.

A total of 14 Albanian companies took part in October’s Fruit Attraction trade fair in Madrid, where Albania was the fair’s official partner country.

During the event, Krifca held a meeting with her Spanish counterpart, Luis Planas, to discuss ways of strengthening trade relations between the two countries.

Krifca said the goal is to increase the value of fruit and vegetable exports from the current €400m a year to around €1bn by 2025.

“We are favoured by an optimal climate that allows us to work well in the early production window. Our strengths are citrus, which we grow in the border areas where there are around 400-500ha of production and now also kiwifruit, grown in the central areas of the country,” she said.