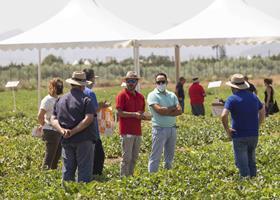 BASF unveiled its new offerings in melons and watermelons at a weeklong event held at its R&D centre in Cartagena, Murcia at the beginning of July.

Among the innovations on display were the company’s new Pearl range of cantaloupes and the latest additions to BASF’s mini Piel de Sapo range allowing growers to extend their harvest season.

“With the Pearl range, we want to make a difference,” said melon account manager Enrique Ballester.

“By changing from a grey to an attractive cream colour, it offers the producer an unambiguous cut-off point, so as to avoid claims at destination, since when the melon reaches the consumer, it is at its optimal point.”

In the magenta beef cantaloupe range, meanwhile, BASF has introduced a new variety for the early production cycle, Magverik F1, a highly versatile melon suitable for the fresh and processed markets thanks to its higher percentage of dry matter and characteristic colour.

In the Charentais segment, BASF has this year launched two new varieties: Eclair F1 for the early cycle and Torum F1 for the medium cycle.

“The first stands out for its precocity and size, and the second for its organoleptic quality and resistance to powdery mildew and aphids,” the company said.

BASF also continues to consolidate its range of mini Piel de Sapo melons for the export market with two new varieties Kumara F1 and Kudoru F1 with which it covers the national production cycle from 1 June to 30 September, as well as the off-season cycle in Brazil from 1 October to March.

“This line adapts the quintessential Spanish melon to a more convenient format, ideal for export, but also for the national market, where small family units proliferate,” the company said.

In the traditional Piel de Sapo segment the La Mancha range has been expanded with the introduction of Rockero F1, a melon described as having excellent flavour, a crisp flesh and good postharvest shelf-life.

“It has a different, crunchy bite, but with a lot of flavour, intensity and a good level of sugar.”

“Our flavour base comes from our range of varieties for fresh, with references such as Boston F1, Bengala F1, Fashion F1, Style F1 or Stellar F1.

“From there, BASF has raised the bar and put its Gem line (Sun Gem F1 and Moon Gem F1) on the market, aimed at high-value brand projects and for a consumer who seeks a sensory experience and an explosion of flavour, juiciness and with a different bite.”