BayWa has announced that it has invested in Spanish start-up Spherag through its investment arm, BayWa Venture, alongside co-investors Bonsai Partners and Ship2B Ventures. 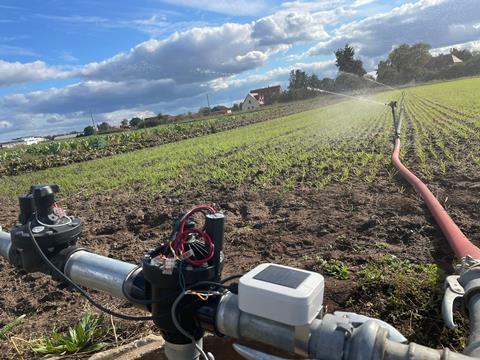 Spherag has developed an internet of things (IoT) solution to digitalise and automate existing irrigation systems, reducing water and energy consumption in agriculture by one-third.

According to BayWa, the new investment will be used to expand distribution operations and develop additional use cases for the current solution in the area of precision irrigation.

“The number of irrigation systems will need to increase around the world to ensure the cultivation and supply of certain foods,” said Marcus Pöllinger, member of the BayWa board of management.

The Spherag solution consists of solar-powered modules that can be fitted to the control units of existing irrigation systems.

The network of modules creates a digital twin of the system, which monitors irrigation in real time and can be controlled directly.

In future, farmers will be able to manage irrigation remotely using their smartphones instead of opening and closing each of the valves by hand, Spherag predicted.

“Suddenly there is no longer any need to walk around the entire field,” said Marion Meyer, managing director of BayWa Venture. “Not only does this save time, it also reduces energy consumption and water usage and minimises unnecessary nitrogen leaching.”

Other data sources such as weather stations and soil moisture sensors can also be integrated into the Spherag system, while other functions include measuring water consumption.

“Irrigation in agriculture is still very much an analogue process,” Meyer continued. “Spherag is the gateway to the digital world. It’s a particularly interesting solution for water-intensive cultures such as nuts or avocados, which are in high demand from consumers but are often criticised due to the amount of water needed to grow them. But fruit and vegetable growing in Germany can benefit from the new technology, too.”