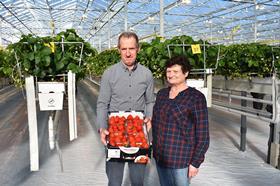 Belgian marketer BelOrta has donated the proceeds of its first new-season strawberries to victims of the war in Ukraine.

The berries, which were the Sonata variety and grown by Halle-based producer Lieven Colembie, were purchased by Special Fruit for a symbolic €125 per 500g box.

BelOrta matched the buyer’s donation, which meant €2,000 was donated via a consortium of major charities operating under the banner Ukraine 12-12.

The group’s strawberry production this season is estimated to be around the same level as last year, when it sold around 9,000-10,000 tonnes of the fruit.

According to BelOrta, there has been “a clear shift” from open-field cultivation to protected, substrate-based cultivation over the past five years.

“Whereas in 2017 more than 71 per cent of the strawberries at BelOrta were grown in open ground, that number has now fallen to 35 per cent,” it explained.

“The acreage of substrate cultivation continues to increase and amounts to 65 per cent of the total acreage for this season.”

Elsanta, Portola, Elegance, Malling Centenary and Sonsation remain the group’s main varieties. Traditionally, the early variety Sonata is the first to be sold.