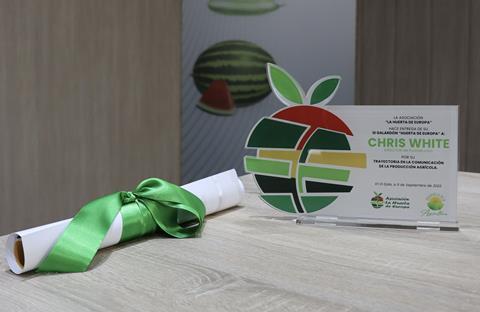 The award was presented at a gala evening in El Ejido last week to mark World Agriculture Day, attended by more than 550 people.

During the evening, hosted by the association’s president Antonio Navarro, guests heard speeches from several dignitaries and representatives from the local horticultural sector, including Francisco Góngora, mayor of El Ejido; José Miguel Serrano, spokesman for La Huerta de Europa; Mazaly Aguilar, vice president of the Agriculture Commission in the European Parliament; and Damián Manzano, director of the SimPretensiones programme on AgroRadio.

The award, named after former PSOE counsellor Juanjo Callejón, who died last year, was delivered by his widow to Fernando de Palacio y Valle Lersundi, the brother of the deceased winner.

Francisco Pérez Sánchez, Councillor for Agriculture in the City Council of El Ejido, presented an award to the Director General of Agriculture, Livestock and Food of the Community of Madrid, Ángel de Oteo.

Likewise, José María Fernández, sub-delegate of the Government in the province of Almería, delivered the award for Champion of Agriculture to Inocencio Arias Llamas, a Spanish diplomat.

During the event, the UK was also recognised for being the second largest market for Almerian fruit and vegetables.

The evening also served as the backdrop for the world premiere of the short film El Desprecio, directed and starring Antonio Navarro under the Agrodifusion Film label.

The film, described as “an existentialist journey into the successes and failures of Almeria’s agriculture” sees Navarro reflect with his old mother on the vision of the “little tyrant” or the consumer.

Throughout the evening, several videos were shown that farmers and journalists from around the world sent to send a message that would dignify the agricultural sector.

La Huerta de Europa Association was set up by farmers in Almería in 2019 to promote the region’s vegetables.

World Agriculture Day is celebrated with the aim of highlighting the challenges facing the sector and recognise the work of small, medium and large-scale farmers in food production.