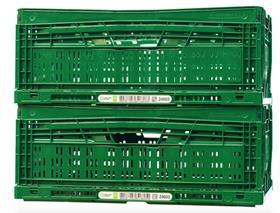 According to EPS, the project is fully in line with the group's CSR policy and part of a general trend in favour of recycling, but also of the circular economy in UK.

Recent figures showed that UK recycling rates had increased 1.2 per cent, reaching 46 per cent of household waste in 2019.

EPS said that it had based its business model on the circular economy for over 25 years. In its CSR report 'Together towards a circular economy', the company announced a target of reducing CO2 emissions by 20 per cent per rotation by 2025.

'Taking millions of trays out of circulation and recycling them represents an important contribution to improving the sustainability of the fruits and vegetables supply chain,' the group stated.

The company noted that the initiative was based on an 'extensive recycling programme' and involved the introduction of new recycled folding trays, made from used rigid blue trays that have started to be replaced by Euro Pool System since February.

The rigid blue trays have been used for the transport and packaging of fruit and vegetables since the 1990s.

'There are currently still millions of blue rigid trays in circulation, all of which will be collected and recycled,' EPS continued. 'This gigantic operation will be completed by mid-2022 and fits into Euro Pool System's strategy to make the entire fresh food supply chain in the Benelux countries more sustainable. The company is working on this with all its partners: from cooperatives and producers to wholesalers, retailers and processing companies.'