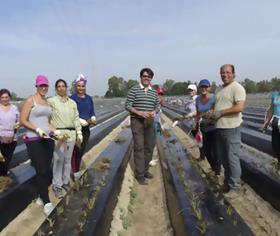 Organic soft fruit specialist Flor de Doñana has been recognised for the positive impact it has on the environment.

The Almonte, Huelva-based company became one of seven businesses to win the first annual Best of Spain award for being among the B Corp companies that have generated the most positive impact in Spain.

The prize was awarded at a special ceremony in Zaragoza last week hosted by B Lab Spain, the non-profit organisation that aims to boost a global movement of people who use business to generate a positive impact in the world.

“We are very proud of the first companies recognised as Best For Spain this year,” said Pablo Sánchez, executive director of B Lab Spain.

“These inspiring companies are the archetype of business models and impact business strategies that are building a new economy, an inclusive and regenerative economy that adds value for all stakeholders and not just for shareholders.

“To achieve that goal, the B Corps are redefining capitalism and demonstrating that they can be at the service of all.”
B Corps are businesses that use profits and growth for a greater good and have a positive impact for their employees, communities and the environment.

Businesses are externally assessed across a range of criteria, including governance and transparency and environmental impact, and must meet a certain overall score to qualify.

To date more than 3,000 companies in 64 countries and 150 industries have signed up to the movement. Flor de Doñana became the first Spanish agri-food company to obtain the B-Corp international certificate last year.