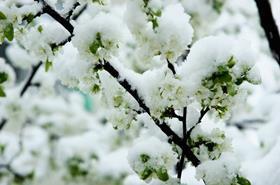 Unseasonably cold temperatures have spread panic across central Europe as incipient crops including stonefruit and topfruit suffer from the frosty conditions.

Countries including Slovenia, Czech Republic, Croatia, Poland, Austria, Germany, Belgium, the Netherlands, Switzerland and France have all been affected to some degree.

Boštjan Kozole of Slovenian producer Evrosad said that the impact on the country’s apple crop was “extremely bad”.

“The cold temperatures on Friday and Saturday have caused severe damage,” he said. “We need to wait a few days to be precise, but it doesn’t look good. It looks worse than last year, when frost caused losses of around 80 per cent.”

In Poland, growers endured temperatures of as low as -6oC in mid-April, before warmer weather arrived, only to turn frosty again at the weekend.

“We lost around 80 per cent of our sweet cherries and a big part of our sour cherries,” said Dominik Wozniak of Rajpol. “We expect some losses in plums, pears and apples, but it is too early to say.”

Wozniak is hopeful that losses in topfruit will be limited to around 15-20 per cent. “Flowering had only just begun, with lots of closed flowers, which might have helped to minimise losses. But the condition of the leaves and trees is not good. It’s warm at the moment in Poland, then this week it will get very cold again. These fluctuations can put the trees under stress and affect the fruit.”

Roman Chaloupka of the Czech Fruit Growers Union said that, while the frost had had a severe impact on cherries, apricots and other stonefruit, production had escaped largely unscathed.

“There has been some damage to early flowering varieties like Ida Red and Jonagold, but it's too early to assess the extent of the damage,” he said. “Overall, the picture is nowhere near as bad as last year, when the industry sustained huge losses because of frost. Growers have done a lot to minimise the impact of frosts by burning straw and other measures and this has helped. We're not out of the woods yet though. There is a chance that apples might have sustained some chilling damage and of course there is still a risk of further frosts.”

Andreas Pregartner, who manages the local topfruit and stonefruit growers for Austria-based fresh produce grower-marketer Frutura, agreed that it was difficult to gauge the extent of the damage.

“We have more information from our area, Styria, which is in the south of Austria and the main apple and stonefruit production area,” he said. “For apples, we estimate that around 50 per cent of the crop has been damaged. At the moment, those orchards that are 350-380 metres above sea level are looking better. The situation is similar for stonefruit, but most growers have successful heated their orchards, and the most affected growers are covered by insurance.”