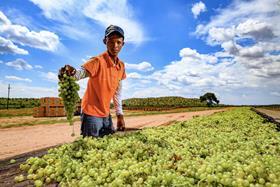 A new UK campaign is aiming to tackle misconceptions around raisins and explain their health benefits and versatility to the trade.

The initiative by Raisins South Africa is looking to highlight the fact that the country's raisins are 'almost entirely residue free, naturally sun-dried and of the highest quality'.

Key campaign messages include highlighting the fact that South African raisins are 100 per cent naturally sun-dried grapes, and just 30g of raisins counts as a portion of five a day compared with 80g of fresh fruit.

The raisins are grown in the Orange and Olifants River regions of South Africa, where the dry, sunny climate combines with an ample supply of river water to create ideal growing conditions.

Farming techniques are focused on caring for the environment, while social initiatives aim to protect public health and local communities.

In addition to the trade PR activity, Ferdie Botha, chief executive of Raisins South Africa, will also be visiting suppliers in the UK in May, while in November a trip is planned to bring UK trade buyers, as well as media from the UK, Germany and France, to the Northern Cape.

Some 60 per cent of the country’s marketable volumes are sold to the UK and EU, and there are long-term plans to boost sales in both markets.

Heavy rainfall during the production season has damaged around 15 per cent of the crop, with a lower than usual tonnage expected.