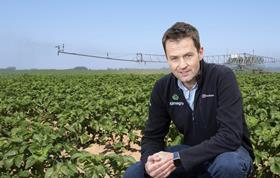 Potato growers now recognise high temperatures as the greatest threat of the key abiotic stresses, according to new research by Syngenta.

Research into the current and future role of biostimulants in potato crop agronomy ranked heat at 74 out of 100, compared to drought at 71, nutrient deficiency at 64 and intensive light at 57, in terms of threat level.

Results showed that 37 per cent of farmers questioned ranked heat stress of very high impact (nine or ten out of ten), with a total of 70 per cent scoring it as seven or higher.

Just 13 per cent perceived the effect on their crops to be a score of four or below, Syngenta's reported.

While drought clearly has potentially larger impact on yield – and was seen to be causing increasingly greater issues with extremes of weather – the majority of ware crops were irrigated to mitigate and manage its effects. Drought and heat stress is inextricably linked for growers.

Growers and agronomists recognised temperatures of 24-25⁰C would result in heat stress during the growing season, but even at temperatures above 20⁰C believed that tuber bulking would be slowed.

During periods of heat stress affected plants would be less effective in taking up irrigation water, along with risk of triggering further stress when applying cold water onto heat stressed potatoes was also pointed out.

“Both growers and agronomists highlighted there are varietal differences in tolerance and response to heat stress, but there is no comparative reference information and therefore rely on personal experience on their farms,” said Cunningham.

The research highlighted that while 40 per cent of potato growers currently see biostimulants as highly important to their crops’ agronomy (ranked as 7 or more), 80 per cent believe they will be in the next five years.

Some 23 per cent of growers questioned don’t see biostimulants as important now, but only 3 per cent think that will be the case in five years.

Among specialist potato agronomists and advisors, around 19 per cent currently see biostimulants of high importance, however 60 per cent believe that they will be within five years.

Most growers and advisors see the key role of biostimulants in helping to manage the effects of drought and high temperatures (72 per cent and 35 per cent).

“The market data has indicated growers and agronomists are looking for more detailed technical information on how and why Quantis works to help potato plants better cope with the effects of stress,' Cunningham noted. 'We now have results of incredibly detailed independent research by University of Nottingham that pinpoints what is happening in the plant and the benefits that can have.

“Furthermore, results of in-field trials and research is refining recommendations for the timing and application of Quantis relative to heat events occurring in the crop this season.”

The quantitative market research involved 60 potato growers and specialist agronomists across England and Scotland, including ten farmers growing over 100ha of potatoes and advisors covering a total of 25,666ha.