Is business trying to game 5-A-Day? 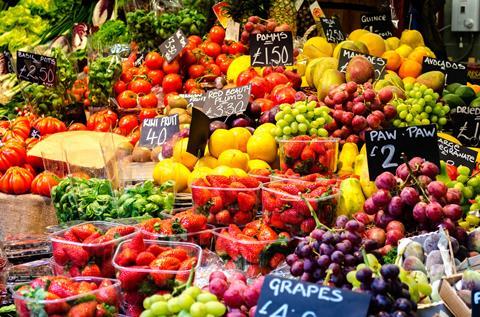 The concept of 5-A-Day was originally conceived for whole fruit and vegetables Photo: Garry Knight, CC BY

We are on the brink of an important change in how we are encouraged to think about our diet. Britain’s health authorities are considering whether to allow processed or 'composite foods' to carry the official five-a-day logo. But is it time to confront the inconvenient reality: that an apple which has been juiced, puréed or wrapped in pastry is simply not the same as an apple on a core?

Currently use of the official five squares logo is restricted to foods which are 100% fruit or vegetable. This hasn’t stopped manufacturers from developing their own logos and claiming that a wide variety of foods from tinned spaghetti to fruit jellies can count towards one of your five-a-day.

The genuine article… and some of its imitators. Photo: HS/Josefine Stenudd/eltpics/David Foggo, CC BY

The public needs consistency and clarity about how five-a-day is applied to products. However there is a fine balance between lowering the thresholds of eligibility to encourage more manufacturers and retailers to use the official logo, versus endorsing products which generally take consumers further away from a healthy balanced diet.

Public Health England(PHE), an executive arm of the Department of Health, is consulting with an external reference group of non-governmental organisations and manufacturers, and has drafted proposals to put to the group for a meeting on the February 20. These proposals include limits on how much fat, sugar and salt foods carrying the official logo could contain. These might provide some safeguards, but we are still in danger of losing sight of the change that the five-a-day health campaign set out to achieve.

The food choices available to consumers have changed massively in the 20 years since the five-a-day concept was introduced in the UK. The epidemiological evidence underpinning the World Health Organisation’s original recommendation of 400g of fruit and vegetables per day (upon which five portions of 80g was based) was collected before products such as fruit winders or smoothies existed.

The original decisions about whether potatoes, fruit juice, dried fruit or pulses should count, (which I was involved in) were made when consumption and awareness of the benefits of fruit and vegetables in the diet was low. As with the formulation of many public health guidelines, the five-a-day message was conditioned by considerations of feasibility and acceptability, and reflected the food landscape and public health concerns of the 1990s. Has the health message been seduced by smoothies?Antonio Picascia, CC BY

In the intervening years, manufacturers have jumped to help consumers achieve their five-a-day by making new products and drawing attention to products with fruit or vegetables in their ingredients. Does this get us any closer to a healthier eating pattern? Does it matter if consumers get all of their five from processed products, possibly all carrying the official logo which they could theoretically do so if the proposals go ahead? I think it does.

The benefits of diets rich in fruit and vegetables are multiple. They give us micronutrient, phytochemical and dietary fibre and have simple positive effects like filling you up and displacing other foods from your diet.

We haven’t identified individual components which could be guaranteed to have the same effect whether eaten as a puree, concentrate or whole plant. Much of the long-term research data is from studies before the proliferation of processed fruit and vegetables. Processing, both commercially and in home cooking, is known to improve digestibility by breaking down the plant cell walls. This makes the naturally occurring sugars more available and carcinogenic, and lowers levels of some vitamins. However, to suggest that tomato puree, or vegetable soup (without too much fat, salt or sugar) shouldn’t count as a fruit or vegetable would seem perverse.

In many other areas of our lives we are used to the idea of a two-tiered approach. We buy designer or premium ranges alongside convenience or value ranges. Perhaps it is time to be more honest about what counts towards five-a-day. Yes, all these processed foods (with appropriate fat / sugar / salt caps) can count, but if a food no longer has the same shape, form or appearance of the fruit or vegetable it was derived from, it is a lesser contributor.

We could go further and say that no more than one 'processed' fruit and vegetable should count in any one day. This would solve the conundrum of whether composite foods containing multiple portions of processed fruits or vegetables, such as smoothies made with as much juice as fruit, could officially claim “two portions”. Nothing processed could. It would also limit the damage if manufactures don’t sign up to the revised official logo and continue making dubious claims on composite foods.

Other commentators on five-a-day have suggested that fruit juice should no longer count, and that the number of portions should be increased to seven-a-day. The concerns about juice stem from evidence that fruit juice is a major contributor to sugar intake, particularly in children.

Draft recommendations from the government’s scientific advisory committee on nutrition propose a 50 per cent reduction in average intakes of free sugars – sugars not contained within the cellular structure of foods – and a 50 per cent increase in intakes of dietary fibre. As the sugar in fruit juice is free sugar, and the dietary fibre is strained off, it is easy to see why removing juice is attractive. However, the processing of fruit into purees and concentrates used in composite foods similarly renders much of the sugar into free sugar and removes dietary fibre. Where would we draw the line?

The study that made the headlines suggesting we need seven portions in fact showed that the more fruit and vegetables the better, five was still better than two. It also found stronger effects from consumption of vegetables than fruits. Clearly we need to re-emphasise the 'at least' part of the five-a-day message, and the need for variety, including vegetables. Adapting the messaging rather than changing what counts or increasing the number of portions, ensures consistency of message and avoids feeding into the perception that 'the experts can never agree, so why bother?”.

Let’s push 'at least five-a-day' back to whole fruit and vegetables. Foods which no longer have the same shape, form or appearance as the fruit or vegetable from which they were derived can only count for one of the five-a-day, no matter how many types of processed fruit or vegetables you eat.

This messaging matches people’s common sense perception: processed fruit and vegetables can help but are not as good as the real thing. So an apple or stick of carrot on the way home from school (£0.25 / £0.05) is better than a pack of fruit flakes (£0.45); there is no equivalence.

This article was originally published on The Conversation. Click here to read the original article.