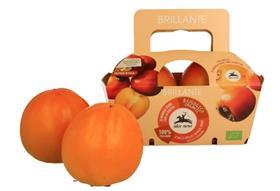 Suppliers in Italy say organic persimmons produced in the country could secure a bigger slice of the European market in the coming years, as companies investing in production of the fruit embark on a new marketing campaign.

CSO Italy, which runs an EU-backed advertising project called Made in Nature, has teamed up with leading Italian organic companies including Brio, Canova, Conserve Italia, Lagnasco, RK Growers and Verybio to promote the Rojo Brillante persimmon variety as a niche, seasonal speciality.

And while neighbouring Spain is set to harvest a much larger persimmon crop of around 400,000 tonnes this year, the bulk of it the same variety, Italy's own much more modest production has been growing significantly in recent years.

'This year, production of the Rojo Brillante has risen to 300 tonnes, from a total of 20 hectares cultivated in Emilia-Romagna, Veneto and Calabria,' sales Mauro Laghi, sales director at Brio. 'We mainly produce for the Italian market, but the growth potential means we aim to target European markets too.”

That potential is already starting to be realised in key markets such as France, Germany and the UK. Harvested between October and November, Italy apparently produces large persimmons with bright red skin and orange-yellow flesh.

Unlike other persimmon varieties, Rojo Brillante does not have seeds and retains its firmness for a considerable length of time, even when ripe.

According to hte group, Rojo Brillante is ideally suited to organic production because it is highly resistant to disease and drought, and doesn’t require fertilising or special processing.

'Until a few years ago, German and even French consumers considered the persimmon an exotic fruit,' the group stated. 'Today, the interest of consumers in organic products is growing, primarily due to their health properties, as they are particularly rich in nutrients.'

Data published by the Research Institute of Organic Agriculture (FiBL) in Switzerland puts the average amount spent on organic food in the EU at €67 per year, which is about twice the amount spent just a decade ago.

In the fresh fruit and vegetable sector, FiBL said the organic share for subtropical fruit, which includes Rojo Brillante persimmons, increased by 17 per cent between 2016 and 2018.