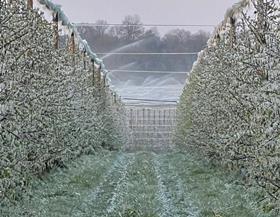 Following an unusually mild winter, French fruit growers were hit this weekend by freezing temperatures of as low as -8oC, with grape growers lighting candles to thaw the vines.

According to Vergers Ecoresponsables, the label for sustainably grown topfruit and stonefruit in France, temperatures reached their lowest point on this date for 75 years.

'In the orchards, arborists struggled all night,' the label revealed on LinkedIn. 'In some regions temperatures have dropped to -7°C or -8°C. Sprinkling is the most effective protection technique, even if with such temperatures saving the crop is difficult. Whether for irrigation or frost protection, access to water is essential for arborists.'

In Switzerland, according to a report in the Independent, fruits such as apricots, prunes and cherries were at risk from the frost, while similar concerns gripped apple and other fruit growers in Belgium and the Netherlands.

Last year's damaging April frost, which scientists concluded was made more likely by climate change, led to what French government officials described as “probably the greatest agricultural catastrophe of the beginning of the 21st century'.

The timing of last year's frost was comparable, occurring on 6-8 April, following a similarly lengthy period of warmth, during which the young leaves of plants were exposed.