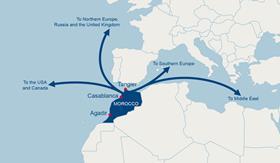 Via its subsidiary OPDR, the group said it had re-configured its operations to provide the Moroccan fresh produce export trade with five maritime services, offering new transport links to Russia, northern Europe, North America, the Middle East and Africa.

“These five services will offer 14 departures from Morocco per week,” the group confirmed. “The port of Agadir is the heart of Moroccan citrus fruit and vegetable production, and will thus be served with three weekly calls serving northern Europe and Russia, via the Dunkrus, Ciss and Agax services.”

Under the CMA CGM brand, the group said the Dunkrus service would provide a direct connection between Morocco and France, Spain, Belgium and the Netherlands, starting on 27 October.

Its rotation will be: Agadir, Dunkirk, Rotterdam, Antwerp, Vlissingen, Le Havre, Rouen, Vigo, Tangier, Casablanca, Agadir. Russia - the largest market for Moroccan citrus - will be served thanks to a connection in Dunkirk.

“Port Vendres will be called twice a week, providing an effective coverage of the South of France and offering an environmental friendly alternative and competitive transport time from road transport,” the group commented.

Elsewhere, a weekly Morocco Shuttle will operate throughout the year, linking Casablanca with Agadir, Tangiers and Algeciras while also serving the US and Canada via connections with other group services in Algeciras.

OPDR, CMA CGM’s subsidiary since 1 July, will link Morocco to Spain and northern Europe via:

These two services will provide a “unique connection” to the UK, with calls in Tilbury and Portsmouth, the group added.