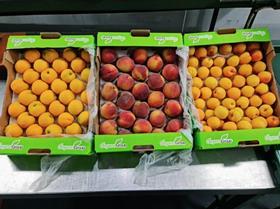 OTC Organics will kick-off the South African organic stonefruit season with peaches, nectarcots and apricots from its partner Pro-Plum Orchards, part of the OrganoGroup.

The organic fresh produce distributor said that it expected the first stonefruit in its warehouse in Poeldijk, The Netherlands, from week 49, for further shipment to Europe.

OTC Organics has the sole mandate to market the organic stone fruit of the OrganoGroup in Europe.

The OrganoGroup family business has been growing certified organic fruit for 16 years and is located in the Waterberg Mountains, near Mookghopong (Limpopo) in South Africa.

The company grows about 65ha of organic stonefruit, with the region characterised by a very early start to the season due to the favourable (high) location, making it an ideal area for growing stonefruit.

According to the OrganoGroup, it is focusing on expanding its plum varieties, so that the season can be extended.

Until Christmas, the range consists of peaches, nectarcots and apricots, the OrganoGroup said, and will be supplemented with plums in week 50. Plums and nectarcots are still available after Christmas.

Meanwhile, organic vegetables have increasingly become a mainstay of the OrganoGroup's portfolio, predominantly marketed in Europe by OTC Organics.

The organic sweet potato export season runs from February to August, while Kuri squash shipments start in December and run until February.