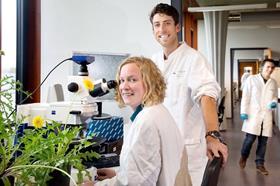 Members of the research team at Wageningen University & Research

Researchers claim a newly discovered gene will make it possible to produce seeds from crops that are genetically identical to their mother plants.

The gene has been given the name PAR, shortened from parthenogenesis, the process whereby egg cells grow into plant embryos without fertilisation of the egg cells.

“The discovery marks a definitive breakthrough and crowns the research team's work that started at KeyGene over 15 years ago,” according to a joint media release from the research institutions involved.

The discovery is expected to lead to major innovations in plant breeding over the coming years.

“Apomixis is seen as the holy grail of agriculture,” the media release added. “Because apomictic plants produce ‘clonal’ seeds from the mother plant, the process allows uniquely superior combinations of a plant’s traits to be captured in one fell swoop. Apomixis can therefore accelerate the breeding of innovative crops, make seed production less costly and bring the advantages of hybrid breeding to a lot more of the world’s crop species.”

While the importance of apomixis for agriculture has long been recognised, it has yet to be successfully introduced in plant breeding practice.

Although most plants do not use apomixis, most do have genes that are strikingly similar to the PAR gene. This suggests that apomixis naturally acts as a modification of normal sexual reproduction and, therefore, potentially also that apomixis could be widely applicable for innovative agriculture by using modern tools like gene editing.

Researchers from KeyGene and Takii Seed have started this work already, successfully showing that the PAR gene can cause parthenogenesis in both lettuce and sunflowers, bringing the prospect of apomixis in crops yet another step forward.