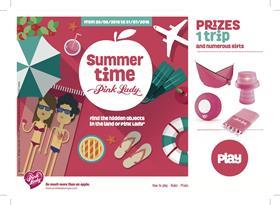 Pink Lady Europe has announced its marketing campaign for summer 2016 with a presence at several festivals, a consumer competition and digital media activity.

The brand will be advertised on television in six countries, including Germany, Belgium, the Netherlands, Denmark, Ireland and Norway, and there will be a poster campaign in Sweden.

From 20 June - 31 July Pink Lady will launch its ‘Summer Time’ competition hosted online and through smartphones, giving consumers the chance to win a holiday and other prizes by seeking objects hidden in the Pink Lady décor.

As well as the giveaway, the competition will offer grower and recipe information and will be promoted on packs through special packaging and stickers.

A Pink Lady roadshow will arrive in six German cities throughout august, where a pop-up event will offer tastings and freebies. This tour will be promoted by a photo competition and local poster campaigns.

In Austria, Pink Lady will attend Vienna’s Donauinselfest from 24-26 June to meet with a potential 3.5 million festivalgoers, while in Belgium the brand will join the Elle Summer Tour and offer tastings during eight urban events.

Meanwhile in France, Pink Lady will be promoted through a 100 per cent digital campaign during July, and through a tie-up with chef Yoni Saada to create videos, articles and live recipes.