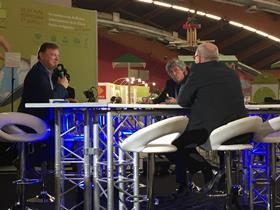 Planted area for potatoes will rise by 3.6 per cent across Europe’s five main producing countries this year, according to season forecasts.

The North-Western European Potato Growers (NEPG) foundation estimates that the total planted area in Germany, Netherlands, Belgium, France and the UK will be 572,485 hectares, excluding seed and starch potatoes.

The season estimates – announced for the first time at the medFEL trade show in Perpignan, France on 25 April – revealed that all five countries in the group will plant more potatoes in the upcoming season than they did last year, with the biggest increase expected in Belgium.

Compared to the five-year average across the northwest European growing region, the planted area across the five countries is set to rise by 7.2 per cent, while the total harvest increases by 5.4 per cent to around 27 million tonnes.

The NEPG stressed that the final volumes will depend more heavily on yields than the planted area, with the planting season still underway.

All early processing varieties have already been planted, but growers are still in the process of planting the main crop. “Plantings are well on schedule,” the NEPG wrote in a press release, “however in all NEPPG countries the soil is dry and the seed potatoes are thirsty.”

For the remainder of the 2016/17 season, the NEPG indicated that stocks are low, particularly in seed potatoes, with several countries in the foundation soon to publish their new stocks based on grower surveys.

One major change in the NEPG potato sector is the enormous increase in the processing capacity, particularly in Belgium, which has been driven by growing demand for potato products outside the EU.

Trade association Belgapom recently revealed that the Belgian potato industry invested €310m in the country’s processing industry in 2016 – more than its total investments for the previous two years combined.

The Belgian processing industry used 4.4 million tonnes of potatoes last year – an increase of 11 per cent.

The demand for raw material in other NEPG countries is also growing and, despite the lack of seed potatoes this year, growers anticipate growing demand for high-quality processing potatoes.