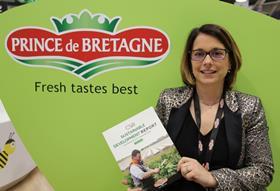 Brittany-based marketer Prince de Bretagne kicked off the year by releasing its Sustainable Development Report for 2018. In it, the company outlines its ten sustainability commitments, drawn up in collaboration with all the network’s stakeholders.

The first two promises, quite naturally, are to defend the organisation’s values in order to successfully sustain the Breton vegetable network and to offer quality products that are fresh and healthy.

Other commitments focus on the environment, including contributing to the region’s energy transition, limiting the impact of packaging, developing organic production, strengthening the company’s agro-ecological approach and fighting food waste. Others deal more with the farming profession, guaranteeing the independence of producers and strengthening the attractiveness of farming. The final commitment is to defend and contribute to the development of the region.

Prince de Bretagne is also launching its own range of zero pesticide residue tomatoes. Marketed under the new label “100% Nature & Saveurs”, these tomatoes are guaranteed to be grown without the use of pesticides, with producers utilising only organic, non-synthetic, plant protection agents during the production stage.

The tomatoes are equally guaranteed to contain zero residues, meaning no quantifiable synthetic molecule residues above the recordable limit of 0.01 mg/kg, no contaminants and no risk of banned residues.

“The producers have a plan of analyses throughout the production process,” said marketing director Marie Dérédec, who revealed that the tomatoes are tested for over 240 active substances.

According to Dérédec, a full range of 100% Nature & Saveurs tomatoes is now on the market, including on-the-vine tomatoes, round tomatoes and cocktail tomatoes. “It is quite niche for the French market,” she said. “Those markets that show good demand for organics are the main target – Germany and northern Europe, in particular.”

The marketer is also aiming to reduce food waste and attract younger consumers to its products. The marketer’s partnership with Frigo Magic and its anti-food waste app is just one example.

“We are promoting the use of cauliflower as a healthier alternative to rice or couscous,” said Dérédec. “You can even eat the stalk by grating it so it is a very good anti-waste product.”