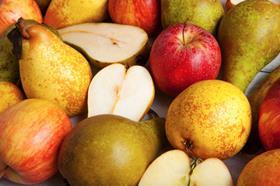 Hortgro, South Africa’s deciduous fruit grower organisation, has said it is looking forward to the start of what it has called a promising apple and pear season as the fruit starts to arrive in the UK.

The 2021 marketing campaign, now in its 13th year, is focusing predominantly on targeting the trade and consumers through industry publications and social media, alongside new recipes.

“Overall, everything looks very good so far,' said Jacques du Preez, Hortgro general manager for trade and markets. 'There were no excessive heat waves as in previous seasons resulting in almost no sunburn. The cooler nights have also contributed to very good colour development.”

It is currently estimated that for the 2021 season, the country's apple and pear industry will see a 4 per cent increase from last year in South African apple exports to 38.25m cartons, with a 20 per cent rise for the Cripps Red apple variety in particular.

Hortgro is reporting 6 per cent growth in pear exports to 17.8m cartons, with an estimated 6 per cent increase in the most exported variety, Packham’s Triumph.

These above-average volumes of South African apples and pears are mainly driven by young orchards coming into production, and more favourable weather conditions throughout the winter and summer.

Since November last year Hortgro has been engaging the stakeholders involved in specifically the Cape Town port to address shipping delays.

“There are newly established weekly forums with the other fruit industries, other relevant port authorities, shipping lines, exporters and logistics service providers where the logistical issues are addressed,' Du Preez noted.

The global shortage of empty containers remains a challenge, however, although some relief is expected from the end of April.

Du Preez also explained that the South African fruit industry had adapted well in being able to mitigate the impact of the Covid-19 pandemic.

“Originally, there were some additional costs and it caused great uncertainty, but the industry and consumers adapted quickly to the new environment,' he confirmed. 'Fruit growers are used to new challenges and adaptations, although this was a big one.'

On the upswing, Covid-19 amplified the importance of health and eating a healthy diet.

Although it is still too early to compare 2021 consumption with 2020, there is a relatively healthy demand for fresh produce.

“Last year’s sales of fruit and vegetables increased significantly, and the feeling is that this trend will spill over into this year,' Du Preez added. 'But consumer spending is under pressure so it will remain a challenge.'