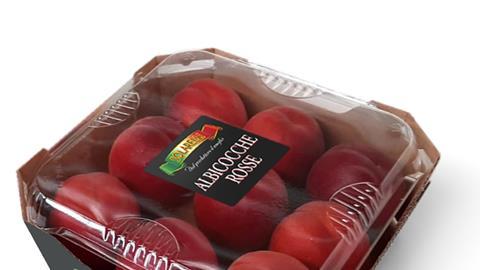 In partnership with producer Agricola Guidi and distributor Gruppo Mediterraneo, this year the cooperative wants to double the volume of premium apricots it sells worldwide.

Cesena-based cooperative Apofruit Italia says it has doubled the volume of red apricots it expects to sell this year, and expects demand for the fruit on export markets to be stronger than ever.

The company markets the apricots on behalf of Agricola Guidi, a producer with which it has worked since 2019. Agricola Guidi itself is managed by Gruppo Mediterraneo, a consortium within the Apofruit Group that involves Apofruit Italia and a number of other specialised, independent fresh produce companies – all based in Italy.

Last year, the cooperative sold around 800 tonnes of red apricots through supermarkets, and 70 per cent of that business was outside Italy.

According to Apofruit sales director Mirco Zanelli, consumers showed a lot of interest in the product thanks to its vivid appearance and superior taste. Compared with more common varieties of apricot, the red ones commanded an average price that was 35 per cent higher, he adds.

No wonder Apofruit wants to extend the project. “From June to September 2022,” Zanelli explains, “for the second year running, we will extend the marketing of red apricots to other countries. The forecast is to arrive on the markets with around 2,000 tonnes, more than double the quantity of the previous year, and to expand our presence in the European major retail channels.”

He adds: “As well as confirming Germany, Great Britain and Scandinavia, we are also aiming to expand to Switzerland, Belgium, the Netherlands and other countries.”

“[They] cover the entire summer season with fruit at least two or three degrees brix higher on average than yellow-fleshed cultivars,” he notes. “All the organoleptic properties remain excellent. This is the reason why producers are increasing production in all the most favourable areas, from the north to the south of Italy.”

Another important innovation this season will be the product’s packaging. “Last year’s plastic trays will be replaced by cardboard trays and mini tote bags, both in 500g format,” Guidi reveals.

Agricola Guidi sales director Roberto Guidi comments: “The red apricot represents a new Made in Italy excellence that we aim to export increasingly into different countries around the world, above all Europe.”

He adds: “Its crispness and low acidity, combined with a sweetness never before seen in this fruit, have already won over the palates of many consumers. However, we are only at the beginning of this project and there is plenty of room to do much more, while at the same time expanding into new markets.”