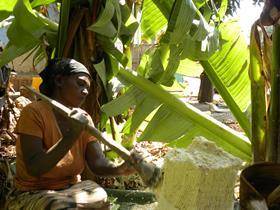 'This is a crop that can play a really important role in addressing food security and sustainable development,' one of the report’s authors, Dr Wendawek Abebe of Hawassa University in Awasa, told the BBC.

A close relative of the banana, the enset plant’s fruit is inedible but its stem and roots are used in the south-west of Ethiopia to make porridge and bread.

Around 20m people are said to be reliant on enset as a staple food, but the report found it could eventually feed more than 100m people.

“Expanding the range of cultivation of currently underutilised crops has significant potential to support the diversification and resilience of global agrisystems under climate change,” says a summary conclusion on the website IOP Science.

“An extensive wild distribution suggests that a much larger region may be climatically suitable for cultivation.”

To increase and expand its production beyond that, however, will require further research into its suitability in other production areas and climates, the authors added.

“Whilst this represents a challenge to existing agrisystem and food networks, it is also an opportunity to adopt an improved suite of climate-resilient crops with multiple food security co-benefits.”