Global Pac Technologies has brought together two cutting edge robotic technologies in a pairing that it claims can dramatically reduce labour requirements in post-harvest facilities across the globe. 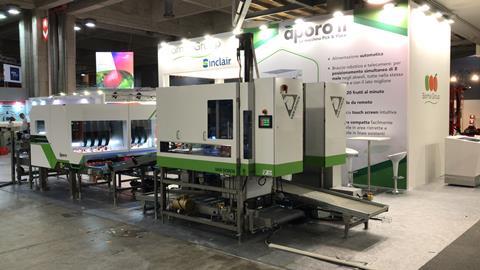 Aporo II and COR on display at Interpoma 2022

The company debuted a working demonstration of its Carton Optimisation Robot (COR) alongside the Aporo II robotic apple packer designed and manufactured by New Zealand’s Robotics Plus at this week’s Interpoma apple trade fair in Bolzano.

The Aporo produce packer was launched in 2018 with the aim of reducing the labour required to place fruit into trays. This then focused packers’ attention on their next challenge – getting the full trays into cartons.

US head-quartered Van Doren Sales took up the challenge and after several iterations, the COR was heavily tested in both hemispheres, and is now ready to launch commercially.

While Aporo and COR are modular pieces of equipment, both have been designed to integrate up and downstream in the packhouse. Integrated together, they remove the need for labour to place fruit in trays and get trays into cartons.

“This means that packhouse operators can redeploy their labour to value adding activities, rather than the repetitive or mundane ones,” said Cameron McInness, director of Global Pac Technologies who distribute both robots globally.

Coupled together, the two technologies can pack a minimum of one carton per minute per belt, or two cartons per double belt, without any manual labour.

“Our business is customer led. We listen to their pain points, and we look for solutions,” McInness said.

“Depending on the nature of the produce and the packhouse configuration, the combination of these two technologies can see a reduction of up to six employees per double belt which is a huge win for the customer.”

Global Pac Technologies is a joint venture between New Zealand firm Jenkins Group and US-based Van Doren Sales. It was formed in 2018 in response to the growing move towards automation in the post-harvest sector.

Global Pac is focused on acquiring and developing new technologies to optimise packhouse processing operations and have seen great success with installations across the globe.