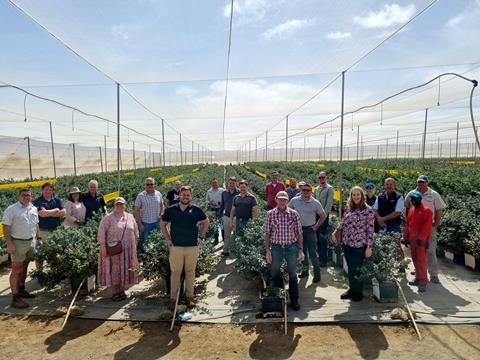 The experimental plantings are in Namibia’s Aussenhehr region, and are open to Southern African producers and exporters.

Aussenkehr is known for its early season seedless table grapes, but it is now possible that Namibia’s Grape Valley may in future feature in blueberry exports.

Of more significance is that South African producers are seeing cultivars from IQ Berries and Planasa breeding programmes in Southern Africa for the first time.

Pieter Zietsman, TopFruit’s berry manager, said that as the company was able to import the varieties into Namibia three years ago, they could now be viewed under local conditions.

“TopFruit has the commercial right to the new private blueberry breeding programme IQ Berries from Australia and plants for commercial establishments will be available from 2023 onwards,” said Zietzman.

So, while the table grape vineyards in the desert region next to the Orange River were awakening from their winter sleep, blueberry growers travelled more than 1,000km to southern Namibia to look at varieties such as MegaEarly and MegaCrisp.

“The focus of the TopFruit blueberry field day was to showcase the growing ability of the different selections in this region as well as which varieties of the different breeding programmes performed the best in terms of earliness of production, yield and fruit quality,” Zietsman continued.

“They were the clear favourites of all those varieties present. Production as well as size, firmness and a crunchy eating sensation were the main attributes of especially MegaEarly and MegaCrisp.

“These two varieties start ripening in July and harvest is completed by mid-October,” Zietsman noted. “The plants for commercial establishments will be available from 2023 onwards.”

TopFruit already has a significant footprint in Aussenkehr with its presence of Early Sweet, as well as Arra table grape varieties.

“This project now also enables Silverlands, and for that matter other grape growers in the region, to gain experience in production techniques of blueberries, managing very warm harsh summers as well as how to cope with irrigation water from the Orange River that can reach high EC levels.”

Zietsman said that one of the high-priority criteria was that the production season for blueberries fitted in with the table grape harvesting season that normally starts in mid-November.

The 1ha plot of approximately 5,000 plants of 42 different varieties was established in 2019 by Silverlands to evaluate the growing potential of blueberries in the harsh climate, with the option of proceeding with commercial plantings in future.

As far as Namibia is concerned there is already commercial production at Komsberg on the northern bank of the Orange River, as well as at Rundu in the far north of Namibia.

Zietsman said it was quite feasible that around 100ha of blueberries could be established at Aussenkehr in future, which would boost production in the country.