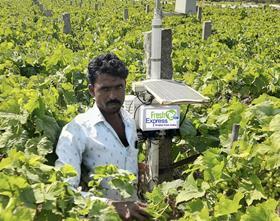 Sustainability is the foundation on which Indian grape grower Fresh Express was built, says director Nina Patil, 'not because it is the catchword of current times,' she explains, 'but because there was no other way to pursue agriculture in a drought-prone area in Western Maharashtra'.

'This was where the family lands were located,' she goes on, 'and the decision was taken by the then family patriarch to do what it took to revive the soil and plant vineyards, while also motivating the entire community to work towards a green revolution rather than abandon their lands and move to the city.'

Fresh Express is a family-owned organisation of 500-plus farmers, pursuing what the company terms 'natural farming', with the aim of making agriculture commercially viable and sustainable.

Indeed, the company has ambitious sustainability targets, including reducing waste and water consumption by 2 per cent each year, replacing fossil fuels with solar wherever possible, replacing chemical inputs with biological and plant inputs, improving the ratio of women to men each year, and actively adopting technology to boost efficiency, transparency and traceability.

'We have been successful in reducing and replacing chemical sprays by 33 per cent, leading to better tasting fruit and increased shelf-life,' says Patil. 'After years of research, development and testing on our own family-owned farms, locally produced pesticides and fertilisers made from organic inputs have been extremely effective against a variety of pests.'

Fresh Express has trained and provided basic infrastructure for farmers to produce these compositions, according to Patil, using biological and plant inputs grown on their own farms.

'Additionally, we have encouraged the use of 'farmer-friendly' fungi and bacteria that can be brewed from a small amount of culture for mass production and sprayed in poor weather conditions, to prevent diseases such as downy and powdery mildew,' she adds.

As a result, she says, farmers have been able to reduce their input costs by up to 40 per cent. 'Fresh Express's own family-owned farms currently boast a usage rate of over 92 per cent biologically produced inputs and we are striving to push this percentage even higher,' she reveals.

Fresh Express's internal technology team has also developed a “farmer-relevant” weather and irrigation monitoring system at one-fifth of the cost of systems that are generally available, helping farmers take effective preventive actions based on the micro-climate of their plot. The company's drone and satellite imaging systems enable precise detection of plants showing early signs of disease, avoiding unnecessary spread and use of chemical sprays.

Since rural areas are subject to extended hours of power outage, Fresh Express is gradually shifting to solar to power farmworkers' homes in the evening.

'We also pride ourselves on empowering women,' says Patil. 'More than 95 per cent of our workforce is made up of rural women, who have striven to be financially independent. Special awards, recognition, training and financial incentives are given to female farmers, while men are encouraged to support ownership by the women in the family, since we give a higher rate to fruit harvested on women-owned lands.'