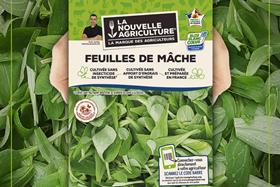 La Nouvelle Agriculture is a consumer brand that was established by members of the Terrena cooperative, which Val Nantais joined in 2014.

According to the group, the brand has four main objectives: to differentiate through the quality of its agriculture and the benefits of its products; to establish a relationship of trust between the farmer and the consumer; to be open to new development opportunities, both nationally and internationally; and to optimise economic and operational performance in all sectors and create shared added value.

La Nouvelle Agriculture lamb’s lettuce is produced without the use of chemical fertilisers or synthetic insecticides, the cooperative stated.

“This cultivation management is made possible by a set of preventive measures integrating crop rotation and the use of physical protection,” the company said, according to a report in L’Arboriculteur Fruitiere. “The farms of the producers are also HVE (High Environmental Value)-certified.”

According to Val Nantais, the cooperative's 125g trays of La Nouvelle Agriculture lamb’s lettuce leaves, which are already available on the shelves, offer total traceability for consumers.

'By installing the monagriculteur.coop application and scanning the barcode on the tray, the consumer has a simple and educational tool to connect directly to the producer and gain transparent access to all agricultural practices,” the cooperative said. “This unprecedented application developed by the Terrena cooperative guarantees the highest transparency to date concerning the producer, the farming practices used from seed to harvest and the route taken by the product.”