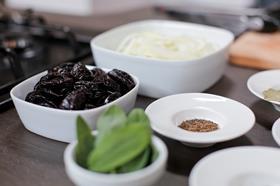 Prunes are experiencing something of a resurgence in popularity thanks to the increasing focus on gut health and veganism. According to the California Prune Board, one of the reasons why the fruit is finding favour with consumers is its adaptability – it just as at home on the breakfast table as it is in a dinnertime dish.

The board has long extolled the tree fruit’s reputation as a digestive aid and now, following its own recent rebrand, it is reframing the industry’s perception of the prune by showcasing its versatility.

“We love demonstrating the unique quality, taste and versatility of California Prunes,” explains European marketing director Kevin Verbruggen. “They’re an ideal ingredient with increasing relevance as a delicious inclusion – both in home cooking and in the foodservice sector. We often find that consumers enjoy them in dishes in restaurants, and then delight in cooking with them at home.”

The California Prune Board works closely with European chefs and chocolatiers to create new dishes for consumers to experience. In the coming months, its renewed collaboration with the Professional Association of Italian Chefs (APCI) will see more sweet and savoury recipe ideas being showcased at events around Italy.

“California prunes make an ideal meat stuffing, and pair well with cheese, olives, and more unusual ingredients like anchovies and miso,” the board says. “They add sweetness to curries and salad, and, as a puree or paste, they can give intense flavour to sauces. They are also increasingly used as a topper to cereal or oatmeal or blended with smoothies, for those consumers looking for a satisfying chew or more natural sweetness at breakfast.”

California prunes are available whole, as well as in several derivatives for ease of use, including diced pieces, puree and powder. Recently, they are becoming increasingly popular as a sugar and fat substitute in baked and processed goods such as biscuits, bread, cakes and even confectionery, their naturally sweet taste giving food manufacturers an opportunity to reduce sugar, without compromising on taste.

Prunes have traditionally had many different culinary uses in cultures around the globe. “In Poland for example, they are added to meat-based dishes like roasts and stews, while in China, they feature in traditional cuisine like dim sum; in South Korea they’ve found their way into the beverage sector; and in Japan they are prized as a source of nutrients and often eaten with yoghurt for gut health,” the board says.

At a recent US embassy event in London, American chef Mary Sue Milliken served dignitaries a dessert of California Prunes marinated in Armagnac alongside a chocolate and pistachio terrine, showcasing how steeping prunes in spirits, wine, stock or even vinegar can give them even greater versatility in use, either as an accompaniment or ingredient.

It’s this versatility that the California Prune Board wants to encourage. “Dried fruit can be just as tasty and texture-enhancing as fresh fruit, and as a shelf stable product it is an easy way to boost taste and nutrition,” says Verbruggen. “We’re on a mission to spread the good news about California Prunes, as ever more people discover their versatility.”