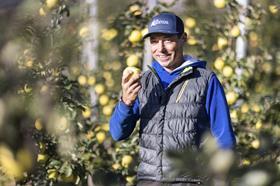 Production of Yello, the brand name for a round, pale-yellow apple variety called Shinano Gold, is expected to almost double this season to around 2,100 tonnes.

Described as crisp, juicy and sweet, with an aroma “reminiscent of pineapple and lemon peel”, Yello is grown exclusively under licence for the European market in South Tyrol by members of the Italian groups Vog and Vip.

This year’s production will be about 45 per cent larger than it was in 2020/21 and, for the first time will include the first five tonnes of organic Yello.

With the branded fruit set to be available until April, Vog and Vip have undertaken various marketing activities to support this year’s campaign.

This week, they have rolled out a major promotion called Settimane Gialle (Yellow Weeks) at wholesale markets throughout Italy.

For Hölzl, Yello’s performance this season suggests it has an especially bright future. “Yello stood out again this year, as soon as it arrived on the market in mid-November, thanks to its premium quality and organoleptic characteristics that make it particularly recognisable to end consumers.”

In the meantime, the brand also features in a new promotional videos shared on the networking website LinkedIn, and on a revamped website.

'The new Yello website allows us to illustrate to the end consumer all of the unique characteristics of this apple, which originated in Japan, but which in South Tyrol has found the ideal conditions to release all its fantastic aromas,' explains Benjamin Laimer, marketing manager of Vip.

'We have entrusted the authentic and genuine story of two farmers who have chosen to cultivate Yello, Hubert Steier in Valle Isarco and Erwin Blaas in Val Venosta, with the task of explaining why this apple is so unique and special.'