Can vertical farms feed the world? 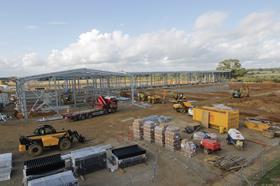 The team at Fischer Farms' site in Staffordshire

A lot has been made of vertical farms in the past few years – and with good reason. They require less space, slash food miles, eliminate chemical inputs and generally produce crops with more consistent quality and a longer shelf life.

Nevertheless, some people’s scepticism about the commercial viability of vertical farming seems justified. High energy prices and expensive tech mean the sums don’t add up for most crops, and although the cost of production has been falling, controlled-environment horticulture doesn’t appear to be the silver bullet some might claim for feeding an expanding world population sustainably.

Niche, high-value crops such as micro greens, herbs and baby leaf have so far been the focus for vertical farmers – and although packed with flavour, their impact on sustainable food production has been, and will remain, fairly minimal.

One man keen to make a bigger difference is CEO of Fischer Farms, Tristan Fischer – an experienced and ambitious environmental entrepreneur with grand plans for the future. Currently he grows nothing more substantial than rocket and baby leaf at his vertical farm in Staffordshire, but 10-15 years from now, he wants to level upto commodity crops such as wheat, rice and soy, hopefully paving the way for some of the world’s least sustainable foods to be grown sustainably and at scale – not just by him, but by indoor growers across the world.

“Just thinking about vertical farming as the here and now of salad is the wrong way of looking at it,” he says. “We need to have a worthwhile destination that we’re aiming for, and we need to understand why we want to get there. For me, it isn’t good enough to simply say I want to sell more salad; I want to inspire change.

“I always look at the present through a lens of where we’ve come from historically and where we’re going scientifically to give the best view of where we could end up. If I do that and look at what’s going on in the energy and food sectors, I can see that if we don’t make these kinds of decisions with things like vertical farming, there is a real world of pain ahead of us. I want to help make the world a happier place rather than ending up in a dystopian future of hunger, poverty, climate refugees and war.”

High stakes then, but if anyone can help lead the charge towards sustainable food production, Fischer seems like a good candidate. With a raft of experience in the clean energy sector – from tidal energy to solar power to carbon capture – Fischer says his entire career has been leading up to this point. And having begun operations at Fischer Farms’ 3,200 square metre facility near Burton-upon-Trent in 2019, he is now just eight months away from opening the world’s largest vertical farm in Norwich.

The new site, next door to the John Innes Centre and University of East Anglia, has been under construction since July this year and once complete, it will boast a whopping 25,000 sq m of production – capable of producing the equivalent of 72,000 90g bags of salad a day. This will trump the world’s second-largest vertical farm, which is currently being built by the Jones Food Company in Gloucestershire and will open early next year with around 13,750 sq m of growing space.

For Fischer Farms, scaling up from its site in the Midlands (‘Farm 1’) to the new mega-farm in Norwich (‘Farm 2’) might seem like a big leap, but it has been carefully planned. Fischer has built up his business in stages, starting with a miniature hydroponics trial under his wife’s vanity table, before progressing to a shipping container and then building the farm in Staffordshire. “With everything we do, we have one foot in the past and one in the future,” says Fischer, “so we don’t jump into the future blind”.

The idea is that each farm acts as a test bed for the next, and Fischer is adamant that, in the coming years, renewable energy, LEDs and other relevant technologies will continue to get cheaper and more efficient – an inevitability driven not only by the uptake of vertical farming but various other industries that rely on the same tech.

Once Farm 2 is up and running, the company will start looking ahead to its next facility – and with £100 million of funding secured from sustainable investor Gresham House, there is enough capital to build three further farms, Fischer says, taking the company’s total to five. There is space for three of these at the site in Norwich.

Since electricity generally accounts for around 80 per cent of the total cost of running a vertical farm, being close to a renewable power source is key as it brings down the cost of production. While profitable vertical production of wheat, rice and soy is still a way off, Fischer expects production to begin sooner in sunnier areas with a greater potential for cheap solar power, such as Spain and North Africa.

With this in mind, Fischer is keen to expand his business outside the UK and sees vertical farming as a major opportunity for improving food security in desertous regions. “Certain parts of the world like the Middle East and North Africa really struggle to produce food, but vertical farming is perfect for those locations,” he says. “They have lots of sun, hardly any water is used, and there’s plenty of land to build at a really large scale.”

In the UK, the next step for vertical farmers is to scale up production of salads and herbs, while expanding into other crops like soft fruit. In the next decade, Fischer expects controlled-environment production to start “dominating” in these products, although he stresses that vertical farming will complement conventional agriculture rather than replacing it – both are needed given global population growth.

“We want to be in a situation where we are providing food for that emerging gap between a growing middle-class population and the Earth’s ability to produce food without wiping out every last rainforest in the process,” says Fischer. “Either we wipe out all the rainforests or we do something different. And I truly believe that if we can produce the right crops at scale, vertical farming can provide food security for everybody in all countries.”