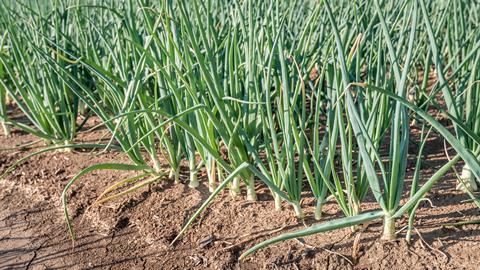 Comment: Europe’s worst drought in 500 years is set to slash onion volumes this season, causing spot prices to soar as producers grapple with the twin challenges of climate change and hyper-inflation

I was interviewed by the FPJ at Fruit Attraction in Madrid back in early October. I was moaning about labour shortages, the lack of support on immigration from government, hyper-inflation, production being driven abroad etc. I’m good at moaning. I finished off the interview with another subject to moan about: the drought. I said at the time: “Don’t underestimate the drought”.

We’re now starting to see the stats coming through for the 2022 growing season to support that statement. Let’s just pick on one crop to illustrate this, a crop close to my heart: the humble onion. I have to declare an interest here. We grow 550 acres of onions ourselves in East Anglia. We also grade and pack around a thousand tonnes of onion per week at our packhouse in Lincolnshire, which is a joint venture with our partners AH Worth. I’m also a long-standing committee member, director and former chair of the British Onion Producers Association (BOPA).

A few years back, BOPA was concerned about the accuracy of the annual stats for onion production in the UK. Growers were being asked to submit their acreage and yields. If you ask a grower to do that, you’ll not be surprised to hear that what he or she tells you will be on the pessimistic side. So, we came up with a plan to ask all the seed houses for details of their seed sales in the UK.

Their main concern was confidentiality, so we addressed this by asking them to send the results to a chartered accountant. He gave them an assurance, in writing, that any information they provided would be treated with the utmost discretion. Furthermore, the accountant would compile the stats and the seed houses would a get a copy of the results, which is good information for them too. Everyone’s a winner! The point I’m making here is that the stats BOPA publish for the forecast of the UK onion crop are produced using a method which is about as accurate as you can get. So, without further ado, here are the stats:

The headline figure is the UK is down 100,000 tonnes. That’s a lot. As a nation we usually grow around 450,000t and consume around 800,000t. We import onions from all over the world as it’s a truly global commodity but most of the shortfall is from the Netherlands and Spain.

As you can see, it’s not just down to the drought. Part of the problem is an 8.5% drop in plantings. Almost all the major onion-growing countries throughout Europe are down on plantings. Why? Growers are moving out of veg and towards more profitable, less risky, less labour-intensive crops, such as cereals. Also, for northern European growers, onions are an energy-hungry crop. We basically blast heat through our onions stores to get the temperature up to around 27°C to crisp them up. Then we slowly reduce the store to ambient temperature. And then, if we decide to keep the onions for sale into the new year, we flick the fridges on and drop the temperature in store to around 0.5°C around now, mid-to-late November. That takes a lot of energy.

If a commodity is down a couple of percentage points, it can have a major impact on price and availability. To be down an estimated million tonnes (or 13.4%) across the whole of Europe is a massive shortfall. On top of this, there’s a major problem with the fungal disease fusarium throughout Europe this season. For onions it manifests itself as base rot and again, the culprit is the drought which caused stress on the plant, resulting in fusarium.

The UK spot price for onions is currently almost double the price of this time last year. That sounds like the answer to all our prayers, but most UK-grown onions are forward sold on contract to the UK retailers. Let’s just say the retailers are offering nothing like a 100% increase in the price. Nowhere near.

Sorry to be the prophet of doom and gloom but sadly this example of just one crop highlights the challenges of not just hyper-inflation, but also the impact of the drought, facing our growers at the moment. See, I told you I’m good at moaning.