Iceland Foods will promote fruit, veg and salads across all UK stores this month as part of a consumer initiative to help combat dementia 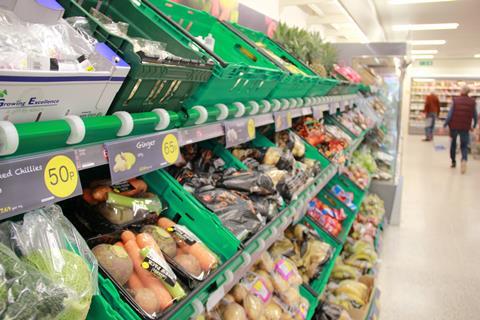 Iceland Foods will promote its fruit, veg and salads this month

UK frozen food and chilled grocery retailer Iceland Foods has teamed up with charity Alzheimer’s Research UK on an initiative to spread awareness of the positive lifestyle changes people can make to help reduce their risk of dementia.

The ‘Think Brain Health’ campaign, which launched today (21 September) on World Alzheimer’s Day, will see Iceland promote all fruit, veg and salad produce across its UK stores for the rest of this month.

In addition, in-store QR codes will direct customers to a hub of dementia information, including brain health tips and Iceland-ready recipes from Great British Bake Off star, Candice Brown.

Research suggests that only a third (33 per cent) of people think it is possible to reduce their risk of dementia. However, up to 40 per cent of dementia cases may be avoidable through health and lifestyle choices, Iceland said in a press release.

Iceland Foods has raised over £5million for Alzheimer’s Research UK since the retailer started support for the charity over a decade ago. Recently, the company’s managing director, Richard Walker, became an ambassador for the charity.

Richard Walker, managing director of Iceland Foods and Alzheimer’s Research UK Ambassador, said: “Over half of us are connected to someone living with dementia and my mum, Lady Walker, was diagnosed with the condition over a decade ago. I know how important the incredible work of Alzheimer’s Research UK is, and Iceland will continue to provide support in raising much needed funds and awareness to help prevent this terrible condition from affecting so many people.”

Candice Brown, Alzheimer’s Research UK supporter, who lost her grandfather Fred to Alzheimer’s disease, said: “Alzheimer’s Research UK’s work is absolutely vital and this partnership with Iceland Foods will raise much-needed awareness about dementia, but just as importantly, highlight the simple ways people can reduce their risk of developing the condition.

“I’d like to say a big thank you to Iceland Foods and its customers for supporting the charity and giving hope to others. Losing my Fred to Alzheimer’s disease was devastating for me and my family, and I hope this campaign ensures other people don’t have to go through the same heartbreak we did.”