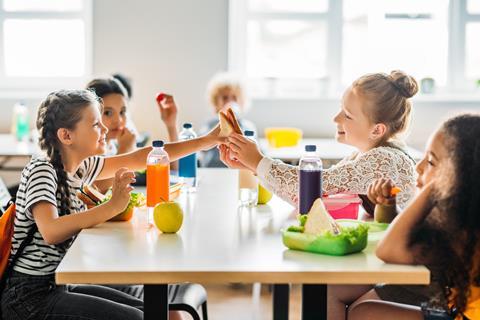 Campaigning by groups representing charities, teachers, doctors and other professionals has generated a tide of cross-party political consensus around the urgent need to feed the future by giving more children Free School Meals, reports The Food Foundation.

Results from a newly released YouGov survey carried out among MPs, and commissioned by The Food Foundation, showed that two-thirds of elected members are in favour of immediately extending access to Free School Meals to all school children from families receiving Universal Credit.

The survey also showed that 46% or almost half of MPs from YouGov’s representative sample supported the idea of extending free school lunches to all primary school children without means testing.

Universal Free School Meals is a policy ask that has been called for by the Mayor of London and is already in place at a primary level in four London boroughs – Newham, Tower Hamlets, Southwark Islington. It is also being rolled out in primary schools in Wales and Scotland.

The YouGov analysis coincides with publication of another new Food Foundation nationwide survey with Childwise of seven- to 17-year-olds, which exposes a range of distressing evidence of children’s experiences of food poverty.

Evidence of the emerging political consensus on the need to address food poverty was clearly seen at last week’s packed ‘Feed the Future’ conference in Westminster organised by The Food Foundation and nine other campaigning charities and organisations ahead of the Government budget announcement this Thursday (17 November).

All three pledged support for the Feed the Future campaign calling for much more help for children as increasing numbers of families struggle to put healthy food on the table because of the cost-of-living crisis.

Lord Bethell said: ”There are very strong moral and social arguments for this policy intervention. Free school meals remove a whole set of traumas that many children have around hunger, around food, and where their food security is going to come from.”

Stephen Timms said: ”We’re all worried about what’s happening with poverty across the country and the impact on children is particularly worrying. Here’s a policy to only benefit children and I think there’s a very strong case.”

Munira Wilson said: ”Cross party, we would all agree that education is vitally important. You can’t have growth without education and skills. Children are our future. If they don’t have food in their tummies, they can’t learn.”

Anna Taylor executive director of The Food Foundation said: ”Our Childwise survey gives yet more distressing evidence of the suffering caused by food poverty that is increasing by the day. It is heartening to see from the YouGov poll, the extent of cross-party support for our free school meals campaign, and from the large number of politicians across the political spectrum who offered support to the Feed the Future event. We cannot just sit back and let children pay a lifelong price for this cost-of-living crisis. Providing more children with free school meals is absolutely essential.”