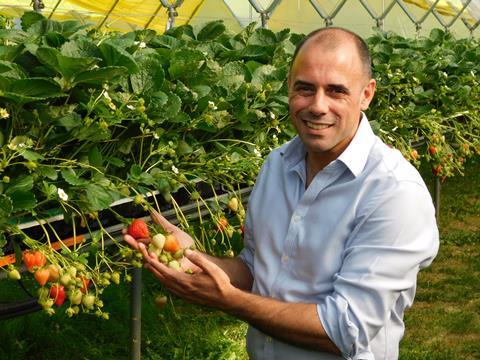 Crop science organisation NIAB has welcomed today’s (10 May) announcement in the Queen’s Speech that the UK Government will bring forward new primary legislation, The Genetic Technology (Precision Breeding) Bill, to take certain precision breeding techniques out of the scope of restrictive GMO rules - where the resulting plants could have occurred naturally or through conventional breeding methods.

Professor Caccamo said: “The Genetic Technology (Precision Breeding) Bill announced today will provide a more straightforward route to market for seeds and crops developed using advanced breeding technologies such as gene editing. It sends a clear signal that Britain is adopting a more pro-innovation approach outside the EU, bringing our rules into line with other countries such as Japan, Canada, Argentina, Brazil and Australia, and opening up much greater potential for inward investment and international research collaboration given the UK’s strengths in genetic science.

“Innovation in plant breeding will be the single most important factor in helping global food supplies keep pace with a growing world population, in the face of climate change and pressure on finite natural resources of land, water, energy and biodiversity. The ongoing conflict in Ukraine has brought into sharp relief the precarious balance which exists between global food supply and demand, and the need to explore every option to increase food production sustainably.

“Access to precision breeding techniques such as CRISPR/Cas-9 will help accelerate the development of higher-yielding crops more resilient to pests and diseases, environmental conditions and climate change effects, food products with improved nutritional qualities, and reduced need for agricultural inputs such as pesticides and synthetic fertilisers.

“Here at NIAB we are keen to explore the potential for gene editing to transform the performance of leguminous crops such as faba beans and soybeans under UK growing conditions. These are neglected crops in terms of breeding effort, and yet the economic, environmental and climate change opportunities they offer, as Nitrogen-fixing sources of home-grown, plant-based protein for human and livestock consumption, are hugely significant.

“We are also using gene editing techniques to support early-stage research into fungal disease resistance in wheat, flowering time variation in strawberry plants, root architecture traits in durum wheat, enhanced nutrient and water use efficiency traits in wheat, microbial symbiosis in rice and coeliac-safe wheat – all of which have the potential to contribute to a healthier, more secure and sustainable supply of food,” said Professor Caccamo.

Soil Association senior policy officer for farming, Louise Payton, said: “The Genetic Technology Bill means a high-tech free for all of GM plants and animals on a commercial scale. There is clear opposition to this removal of transparency and safety checks. The overwhelming majority (85 per cent) of respondents to the Government’s own consultation are against this move. When facing the combined climate, nature and health crisis, we need action to tackle the causes of disease and poor resilience in the first place. These technologies do not do this well and really are the lowest priority on what is a very long list for the Government, and they must not be used as a risky PR front for inaction.

“The move is also a direct violation of choice by the government for farmers and consumers who chose non-GM and in conflict with organic standards which are enshrined in UK law.”

“In terms of GM animals which has major welfare implications, the Government have at least said they will not proceed until these concerns have been met. This must include responding fully to the results of the public dialogue, launched yesterday, to explore views around gene editing in farm animals.”