Total Produce sponsors Eat Them to Defeat Them 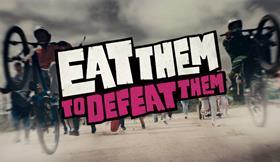 Eat Them To Defeat Them is back

Total Produce has sponsored the Eat Them to Defeat Them campaign from Veg Power and ITV to encourage children to eat more vegetables.

It joins a host of major retailers including Sainsbury’s, Asda and Tesco, as well as frozen specialist Birds Eye, in sponsoring this year’s marketing push. In total there are 10 major food and retail brands on board.

Launched in a primetime ITV advertising slot on Saturday 29 May, the £3 million campaign will continue until 16 July.

It is supported bya £1m above-the-line and digital campaign via Twitter, Spotify, Mumsnet and others, and a schools intervention programme that will see 500,000 children at 1,900 primary schools receive Eat Them To Defeat Them mission packs.

Group marketing director of Total Produce Vincent Dolan said: “Far too often, healthy products are overshadowed by less virtuous snacking alternatives in primetime. The Eat them To Defeat Them campaign, with its extraordinary reach – some 46m people in 2020 – addresses that, placing vegetables front and centre and engaging kids in a fun, irreverent way.

“In Total Produce, we’re all about promoting good health and wellbeing, and finding the fun in fruits and vegetables, so we’re very proud to fly the flag for the fresh produce industry by being a main sponsor of this innovative, incredibly worthwhile initiative.”

Since the Eat Them to Defeat Them campaign debuted in January 2019, it has led to sales of over 517m additional children's portions of vegetables, worth £63m, according to Veg Power.