British soft fruit farming will see ”a huge boost” from the opening of a new specialist, state-of-the-art Innovation Centre in Bristol, according to owner Jones Food Company (JFC). 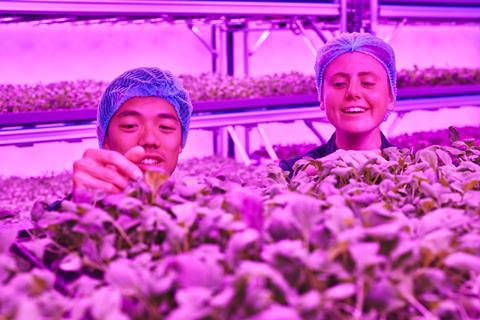 According to JFC, the research and development team at the centre is aiming to end the need for the UK to import soft fruits, herbs and cut flowers within the next ten years.

The Innovation Centre is part of JFC’s plans to further cement its role at the head of the sector, with the company also currently building what will be the world’s largest vertical farm.

The company said it believed it could grow soft fruits, flowers, vegetables and even vines on a commercially viable scale in the coming years, thereby ”significantly impacting the UK’s food security”.

JFC’s Innovation Centre will act as a testbed for the produce to be then grown at what will be the world’s largest vertical farm, currently dubbed JFC2.

The research and development team will closely study the growing requirements of various plants and varieties as the business evolves the produce range from the leafy greens currently grown at the original site in Lincolnshire.

JFC already supplies 30 per cent of the UK’s fresh cut basil to major retailers, equating to thousands of stores each week, and once the JFC2 opens in autumn 2022 the combined growing space will equate to 96 tennis courts stacked in vertical layers.

“We already know we can grow products other than leafy greens, from mushrooms to blackberries to tulips, but our task through this new facility is to push the speed of growth to work on a commercial scale,” said Glynn Stephens, head of growing at JFC. “We want consumers to be able to pick up vertically grown peppers, tomatoes or berries at their local retailer, and know that that product is sustainable and hasn’t had to travel hundreds of miles to get to their plate.

“JFC is leading the charge with this mission, and our goal is for vertical farming to become the main supplier for the UK’s fresh food in the coming years,” he added. “This is very much an area where we’re seeing relatively quick developments, and we believe that having a fresh punnet of British strawberries at Christmas or eating a homegrown salad in winter, is very much in sight through the work we’re doing here.”

James Lloyd-Jones, founder and CEO, Jones Food Company, said that consumers, retailers, government and everyone involved recognised the importance and benefits of reducing emissions, reducing food miles, reducing pesticide use, reducing water use and generally being more sustainable in the way food is grown.

“With the launch of our new Innovation Centre, our aim is to build on what we’ve already achieved and to diversify our produce range at scale, so that the UK can be wholly reliant on homegrown fresh produce,” Lloyd-Jones explained.

”It’s clear from what we’ve achieved and are planning that, within the next ten years, the UK could be in a position where we no longer have to fly-in soft fruits and herbs from southern Europe, north Africa, the Caribbean or anywhere else.

“We will now be able to test, trial and adapt quickly, and I’m sure the learnings here will pave the way for not only the future of UK vertical farming, but the future of UK farming,” he continued. ”We are at the very vanguard of a huge opportunity to develop technology that impacts consumers both here and around the world.

“We have chosen Bristol as the home for our Innovation Centre for several reasons,” Lloyd-Jones noted. Firstly, it’s very close to the site in Lydney site where we’re building the world’s largest vertical farm so there are operational benefits; secondly, there is a large and well-educated workforce from which to attract new talent in the space where agriculture and technology collide; and lastly, of course, as a city, Bristol is among the most sustainably-minded in the UK so there is a strong attitudinal link.”