A new handheld gadget may finally put an end to the maturity lottery, assessing the ripeness of fruit by estimating the chlorophyll content in the skin 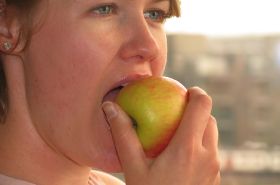 Scientists at MIT, the Massachusetts Institute of Technology in the US, have developed a handheld device that gauges the ripeness of an apple by measuring the glow of chlorophyll in the fruit's skin under ultraviolet light, reports Live Science.

The gadget is thought to be useful for apple distributors, which are sometimes forced to guess where to send their stock rather than delivering the ripest fruit to destinations likely to sell out quickly.

Testing the ripeness of the fruit could also help farmers decide the best time to harvest their crops, the paper stated. The technique involves using a spectrometer to measure the brightness of light at specific wavelengths.

Since such machines are large and pricey, and therefore unsuitable for farmers, Das’s team employed entirely off-the-shelf parts, building a spectrometer that uses ultraviolet light to make the chlorophyll in the skin fluoresce. The dimmer the glow, the riper the apple.

The data is sent via Bluetooth to an Android phone app, which compares the information with a previous database on an apple’s various stages of maturity. If the spectrometer shows a batch of apples has been ripening for 10 days, then this should be shipped out before the 3-day-old ones, preferably to nearby stores.

In the future, Das foresees the technology being used on other fruits and vegetables. Some products like broccoli would be even easier to measure, he said, due to their elevated chlorophyll content.

According to the study, the whole kit, including the smartphone, costs less than US$250.