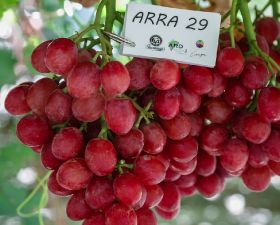 California based table grapes breeding specialist Ard has highlighted the growing availability of early Arra cultivars, which are beginning to appear in good volumes across the market.

Grapa Varieties, which was founded by the Karniel family, exclusively commercialises these new Arra table grape varieties to growers worldwide.

Fourth-generation farmer Sachar Karniel, creator and breeder of the Arra range, continuously develops new varieties for the line at the Giumarra Ard breeding programme in California.

"These early varieties, unique to the Arra programme, are the result of Ard breeder Shachar Karniel’s foresight," the group explained. "Years ago Shachar anticipated the need to replace existing early varieties like Flame and Perlett that were deemed no longer suitable due to their considerable production costs and high maintenance requirements.

"Among the early Arra varieties that are making their mark, Arra 29 and Arra 30 are commercialised worldwide," Grapa noted.

Arra 29 is a large, early, crisp variety and an "excellent replacement for Flame" with exceptional eating quality, the group said, while
Arra 30 is ready for harvest seven days after Early Sweet, perfect for mass production and said to be a replacement for a very early white variety.

In addition to these commercilaised varieties, Grapa pointed to several promising early varieties currenty being tested, many of which will be on show during the upcoming Arra Open Field Days which will take place in Bakersfield, California in July and August, along with a new line of muscat varieties and mid- to late-season varieties.

"The Arra table grape line is constantly expanding; in addition to the early varieties, we continue to create and commercialise mid and late Arra varieties to meet the ever-changing demands of the marketplace," the group added.