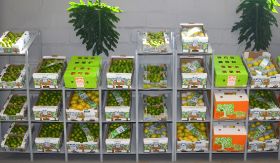 South African citrus producer ALG has revealed that it has not only managed to bump up its production by 40 per cent through new acquisitions this year, but it has also bolstered its successful black workers’ economic empowerment programme in the process.

“Good market foresight which ensured a constant growth in demand for our products with established retailers worldwide is key to our success," noted Gerrit van der Merwe junior, managing director of the group. "This enabled us to make a big move and acquire four new farms in the upper Olifants River Valley, the prime production area of Citrusdal oranges, in the Western Cape Province of South Africa. This will increase our output from 22,000 tonnes in 2018 to over 30,000 tonnes this year.

“We are especially proud of the fact that our black worker’s successful agricultural empowerment project benefitted from this move as one of the new farms purchased actually belongs to them now," he continued. "This will effectively increase their own production by 100 per cent over the previous season. Their produce is marketed by us as part of the ALG Estates total citrus offering to the market.

Van der Merwe said ALG recognised the importance of doing the difficult things first and do them well and, therefore, over the years, the company had consistently worked on increasing the range of its citrus basket which now boasts 41 different varieties.

At the same time ALG realised it had to stretch our production season as far as possible and also systematically establish orchards in different climate zones.

"Our different production units are now as far as 200 km (120 miles) apart covering mountainous areas, temperate sea climate zones and the traditional hot regions in the Upper Olifants River Valley near Citrusdal," he explained. "All in all it means that we  have stretched our bulk production season from May to October yearly but can effectively supply citrus for the full 12 months of the year."

His optimism is shared by the Estate's marketing manager Hendrik Warnich: "For the last few years we have seen a good increase in specific retailer shelf space turnover where ALG has been trusted with the majority of the supply. The main reason for this is that we have the different climatic production areas as well an extensive variety split to always supply fresh citrus such as Easy Peelers, Lemons, Limes and various types of oranges. This enables us to supply citrus at their optimum ripeness with consistent good eating quality on a daily basis to the leading retailers of the world."

The Estate's Black Economic Empowerment (BEE) agriculture programme is one of the best performing projects of its kind in South Africa. Founded as a separate company Cedar Citrus (Pty) Ltd  in 1999 with 32 farm workers as partners a total of 36ha of citrus were established with a start-up loan from  the South African Industrial Development Corporation (IDC).

This unit is managed by a board consisting mainly of the farm workers and farmed by the Estate exactly as any other of their production units which sees that their produce get exported world-wide. The project started making a profit in 2010 and paid off its start-up loan to the IDC in 2012.

Last year the Cedar Citrus partners jointly decided to plough back their profits and extended their operations by purchasing additional farmland to plant more citrus for the export market. An additional 56ha of adjacent farmland has therefore been purchased on which 20ha of new citrus orchards were established. These orchards will come into production by 2022 and add additional impetus to their growth.

ALG Estates has been an accredited member of Fair Trade for the past eight years. Fair Trade subsidies earned through this relationship are ploughed back into upliftment projects for its farm workers such as school education and sport projects.

The Estate also qualifies for the Dutch Milieukeurmerk, the South African Woolworths Group’s Farming for the Future and adhere to the United Nations’ International Food Safety (IFS) standards.