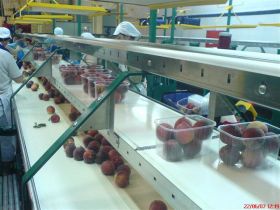 The European Union and South American bloc Mercosur agreed a free trade treaty on Friday, concluding two decades of talks and committing to more open markets in the face of a rising tide of protectionism.

For the Mercosur countries (Argentina, Brazil, Uruguay and Paraguay), the deal eliminates tariffs on 93 per cent of exports to the EU and grants “preferential treatment” for the remaining 7 per cent.

The agreement proposes immediate tariff reductions for 81 per cent of agricultural products from the South American bloc, including apples, pears, stonefruit, table grapes and some dried fruit, while other products, including citrus, berries and some vegetables, will see tariffs reduced gradually to zero over a four to ten-year period.

Europe, meanwhile, will see improved access for cars and car parts, chemicals, machinery, textiles, wine and cheese, among other products.

Topfruit producers in Argentina’s Río Negro and Valle Alto region hailed the agreement but warned it would not change the economic reality they faced.

The executive director of the Argentine Chamber of Integrated Fruit Growers (CAFI), Marcelo Loyarte, told LM Neuquén that “without a doubt this is good news, this agreement has been in the pipeline for several years and it will have a positive impact [on the sector]”. Until now, fruit exported from the region to the EU has faced a variable tariff of between 4 and 8 per cent, depending on the month it is shipped, in addition to a fixed value per kg depending on market conditions.

Argentine cherry producers also welcomed the deal, stating that it would improve the competitiveness of the sector with respect to other producing countries like Chile.

“Europe is a traditional market that no one wants to leave,” said Aníbal Caminiti, manager of the Argentine Chamber of Integrated Cherry Growers, adding that the UK, Spain and Germany were among Argentina’s biggest European markets.

“However, demand has been flat-lining in recent years and has not been growing as in other destinations, such as Asia.”

However, European producer groups reacted with dismay to the deal, claiming that they were being sacrificed in order to secure markets for Europe’s powerful industrial exports

Pekka Pesonen, secretary-general of the Copa-Cogeca union, which represents 23m farmers across the EU, tweeted: “This deal will go down in history as a very dark moment” and described it as “a deal encouraging double standards trade policy and widening the gap between what is being asked from European farmers and what is tolerated for #Mercosur producers”.

In Spain, the Federation of Agricultural Cooperatives of Murcia (Fecoam) sent an open letter to the regional government highlighting the possible negative impact of the deal.

Fecoam’s president, Santiago Martínez, urged the Spanish administration to “make the necessary political efforts to achieve a balanced agreement”, and demanded assurances that imports from the Mercosur countries “comply with the production standards of the EU”.

The EU and Mercosur intensified efforts to reach an agreement after Donald Trump’s presidential victory led the EU to freeze talks with the US and seek other global trading allies.

“This deal delivers a real message in support of open, fair, sustainable and rule-based trade because trade creates jobs for all concerned,” European Commission president Jean-Claude Juncker told a news conference at the G20 Summit in Osaka, where the deal was announced.

“This deal promotes our values and supports a multilateral, rules-based system,” Juncker said, adding that the commitment spoke a “lot, louder than 1,000 communiqués”.